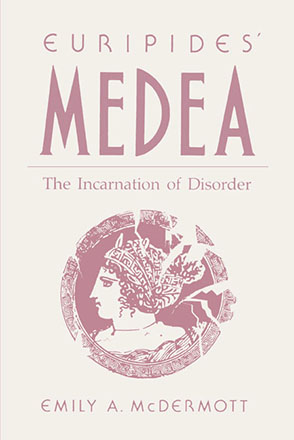 McDermott's starting point is an assessment of the character of Medea herself. She confronts the question: What does an audience do with a tragic protagonist who is at once heroic, sympathetic, and morally repugnant? We see that the play portrays a world from which all order has been deliberately and pointedly removed and in which the very reality or even potentiality of order is implicitly denied. Euripides' plays invert, subvert, and pervert traditional assertions of order; they challenge their audience's most basic tenets and assumptions about the moral, social, and civic fabric of mankind and replace them with a new vision based on clearly articulated values of his own.

One who seeks for "meaning" in this tragedy will come closest to finding it by examining everything in the play (characters, their actions, choruses, mythic plots and allusions to myth, place within literary traditions and use of conventions) in close conjunction with a feasible reconstruction of the audience's expectations in each regard, for we see that it is a keynote of Euripides' dramaturgy to fail to fulfill these expectations. This study proceeds from the premise that Medea's murder of her children is the key to the play. We see that the introduction of this murder into the Medea-saga was Euripides' own innovation. We see that the play's themes include the classic opposition of Man and Woman. Finally, we see that in Greek culture the social order is maintained by strict adherence within the family to the rule that parents and children reciprocally nurture one another in their respective ages of helplessness. Through the heroine's repeated assaults on this fundamental and sacred value, the playwright most persuasively portrays her as an incarnation of disorder.

This book is for all students and scholars of Greek literature, whether in departments of Classics or English or Comparative Literature, as well as those concerned with the role of women in literature.

Emily A. McDermott is Professor of Classics, University of Massachusetts at Boston.