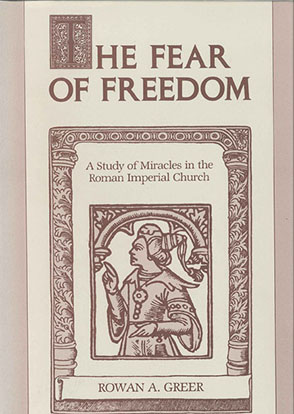 Once the Church gained the predominance in the Empire as part of the Constantinian revolution, most Christians thought that a new Christian commonwealth was in the making. The miracles associated with the cult of the saints (the martyrs and their relics) in the Christian Empire were part of this sacralization. In the Roman imperial church we find a tension between the Christian message, which revolved around virtue and the individual, and corporate piety that focused upon the empowering of the people of God.

With Augustine we find Christian Platonism transformed into a "new theology" far more congruent with the corporate poetry that had by then developed. An emphasis upon grace and upon God's sovereignty fits a preoccupation with miracles better than the old emphasis upon human freedom and virtue and sets the stages for the Western Middle Ages and the cult of the saints, organized and made central to Christian piety.

From a study of Roman imperial Christianity before the collapse of the West we discover the tendency to substitute one kind of freedom for another. Freedom as the capacity of human beings to choose the good does not, of course, disappear, but on the whole it is made subordinate to notions of God's sovereign grace and even to an insistence upon the authority of the church.

Rowan Allen Greer III is Walter H. Gray Professor of Anglican Studies and Fellow of Jonathan Edwards College, Yale University Divinity School. His previous books include Broken Lights and Mended Lives: Theology and Common Life in the Early Church; Theodore of Mopsuestua: Exegete and Theologian; The Captain of Our Salvation: A Study in the Patristic Exegesis of Hebrews; The Sermon on the Mount; and Origen: An Exhortation to Martyrdom, Prayer, and Selected Works.