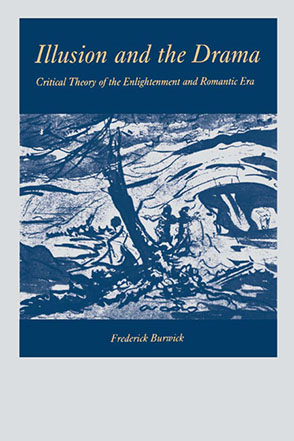 Although few critics still define illusion in contrast to reality, the essential distinction is between illusion as perceived reality and as hallucination or delusion. The concept of illusion as debated in contemporary critical theory has been shaped by developments that took place during the transition from Enlightenment to Romantic thought. Burwick provides a commentary on illusion in contemporary criticism, emphasizing the ways in which such critics as Husserl and Heidegger, Gadamer and Gombrich, Derrida, and Adorno have dealt with the subjective dimensions of aesthetic response. He describes two extreme positions that were asserted in the eighteenth century, the “perfect illusion” in which the work of art is perceived as reality and the insistence on a skeptical distance. He deals with various arguments that locate the source of illusion in the acting, in the audience, in the play, in the imagination, and in the staging effects.

Burwick devotes a chapter to two of the foremost Romantic critics of the drama Samuel Taylor Coleridge and August Wilhelm Schlegel. After clarifying the prominent issues discussed by their contemporaries and immediate predecessors, he shows the radical differences between the criticism of Schlegel and Coleridge, thus dispelling the charge that Coleridge’s lectures on Shakespeare are marred by plagiarism of Schlegel’s ideas.

Frederick Burwick is Professor of English and Comparative Literature at the University of California, Los Angeles. He is the author of The Damnation of Newton: Goethe's Color Theory and Romantic Perception (1986) and The Haunted Eye: Perception and the Grotesque in English and German Romanticism (1987), and editor of Coleridge's Biographia Literaria: Text and Meaning (1989).