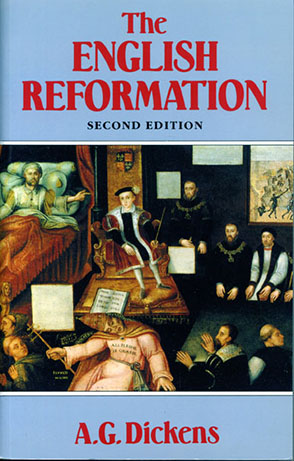 “There is no alternative in sight which comes close to conveying the story of the English Reformation in narrative power and substantial information.”—Heiko A. Oberman, University of Arizona

This book presents a new edition of the classic study of the religious changes that transformed England in the sixteenth century.

Henry VIII officially brought the Protestant Reformation to England in the 1530s when he severed the English Church from the Papacy. But the seeds of the movement, according to A.G.Dickens, were planted much earlier. The English Reformation, first published in 1964, follows the movement from its late medieval origins through the settlement of Elizabeth I in 1559 and the rise of Puritanism.

“There is no alternative in sight which comes close to conveying the story of the English Reformation in narrative power and substantial information.”—Heiko A. Oberman, University of Arizona

“I seized the first edition of The English Reformation as soon as it appeared, and it has been a dominating intellectual presence ever since. It was a wonderful book, elegant, incisive, and humane, it dealt fairly with politics and legislation, but above all it revealed the dynamic appeal of early Protestant ideas to academics and artisans, preachers and parishioners. It was by far the best survey of its subject, and it has not been overtaken since. . . . This second edition is a response to recent ‘revisionist’ suggestions—that the old Church had vitality and appeal, that its rituals and beliefs were supportive and supported, that Protestants had a hard time making converts, and that political machinations, not protest movements, were the agent of change. . . . In a new introduction, (Dickens) insists that the English Reformation was no little local difficulty, explained by specific political circumstances; it was part of the European Reformation, a wave of Christian renewal. . . . It is the old book—only more so!”—Christopher Haigh, Times Higher Education Supplement

A.G.. Dickens is Professor Emeritus of History at the University of London and co-author of The Reformation in Historical Thought (1985).