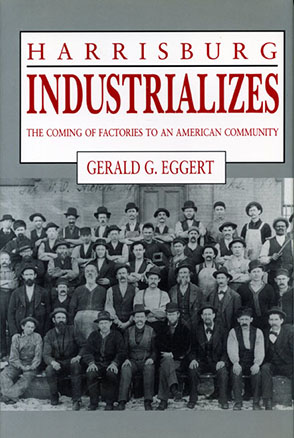 Eggert begins with the earliest years of Harrisburg, describing its transformation from a frontier town to a small commercial and artisanal community. He identifies the early entrepreneurs who built the banking, commercial, and transportation infrastructure, which would provide the basis for industry at mid-century. Eggert then reconstructs the development of the principal manufacturing firms from their foundings, through the expansive post-Civil War era, to the onset of deindustrialization near the end of the century. Through census and company records, he is able to follow the next generation of craftsmen and entrepreneurs as well as the new industrial workers—many of then minorities—who came to the city after 1850.

Eggert sees Harrisburg's experience with the factory system as "second-stage," or imitative, industrialization, which was typical of many, if not most, communities that developed factory production. At those relatively few industrial centers (Lowell and Pittsburgh, for example) where new technologies arose and were aggressively impose on workers, the consequences were devastating, often causing alienation, rebellion, and repression. By contrast, at secondary centers like Harrisburg (or Reading, Scranton, or Wilmington), industrialization came later, was derivative rather than creative, was modest in scale, and focused on local and regional markets. Because the new factories did not compete with local crafts, few displaced artisans became factory hands. At the same time, an adequate supply of local native-born workers forestalled an influx of immigrants, so Harrisburg experienced little ethnic hostility. Ultimately, therefore, Eggert concludes that the introduction of an industrial order was much less disruptive in Harrisburg than in the major industrial sites, primarily because it did not alter so profoundly the existing economic and social order.

A History of Modern Harrisburg

Paul Beers, and Edited with a Foreword by Michael Barton