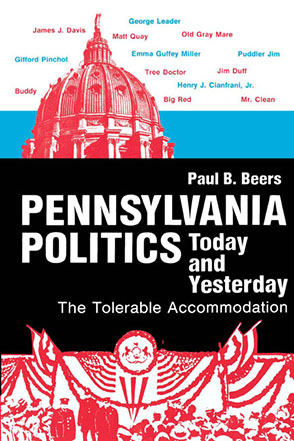 According to the Epilogue: "Although 1978 was a year of intense competition, in the end—in revisions so typical of Pennsylvania—both the old and the new politics were refuted, while the comfortable middle-road was chosen." Beers explains the Keystone State's rejection of ideological extremes by reviewing its traditional virtues: tolerance of diversity, independence in thought and action, and patience under adversity. "Pennsylvania is the vest-pocket edition of the world," said Governor Shafer in 1967, "the ethnographic mosaic," said historian Phil Klein in 1976; "kind and mild, sort of non-Puritanical," said novelist John Updilke in 1977. The book's lively narrative begins with Boss Matt Quay forcing his way into the U.S. Senate in 1900, ends with Governor Dick Thornburgh balancing the taxpayers' demand for budge-cutting against his party leaders' itch for patronage. Between 1900 and 1979 the story is told of the rogues (Penrose, the Vares, and Cianfrani), the reformers (Pinchot, Leader, and Duff), and the greater number whose real achievements were dimmed by implications of corruption (Earle, Fine, and Shapp). On balance the author tends toward Henry Adams's assessment of the Pennsylvanian: "In practical matters it was the steadiest of all American types; perhaps the most efficient; certainly the safest."

Paul B. Beers is the author of four previous books including The Pennsylvania Sampler (1970) and The Republican Years (1971). A newspaperman for three decades, he has been the "Reporter at Large" columnist for The Evening News since 1961 and associate editor of this Harrisburg daily since 1969, He has won awards from the Pennsylvania Newspaper Publishers Association and the American Political Science Association, has been a Pulitzer Prize nominee and a Professional Journalism Fellow at Stanford. Mr. Beers is a graduate of Wilkes College and the Columbia University Graduate School of Journalism.

A History of Modern Harrisburg

Paul Beers, and Edited with a Foreword by Michael Barton