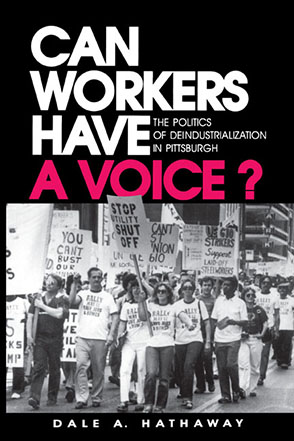 Early in the 1970s, the U.S. began to lose its position as unquestioned leader of the world economy. The industrial sector felt the strain of international competition, and by the 1980s massive plant shutdowns were common. Pittsburgh experienced these years as a time of both triumph and cataclysmic collapse. While the city transformed itself from a blue-collar steel town into a postmodern, high-tech corporate center, it saw nearly 100,000 industrial jobs disappear.

Despite the unprecedented loss of jobs, few Pittsburgh workers were willing to take on the awesome power of U.S. Steel, Westinghouse, or Mellon Bank. Those who did attempt to resist the tide of change failed. Why was this so? Dale Hathaway seeks an answer by looking at three groups of steelworkers and worker allies that mounted highly visible challenges to corporate management—the Network/DMS, the Tri-State Conference on Steel, and the Mon Valley Unemployed Committee. None succeeded in besting Goliath, but Hathaway contends their efforts can show us why industrial workers are reluctant to "fight City Hall." The decisions that led to Pittsburgh's economic transformation, he argues, were not inevitable and others could have been made given a different political climate. But the balance of power favored a few corporate leaders whose decisions were made free from public scrutiny and independent from their employees and the surrounding community. This balance of power, according to Hathaway, best explains why so few workers chose to resist the economic onslaught they confronted in the 1980s.

It is too late for the steelworkers of Pittsburgh to save their communities. However, as the U.S. adjusts to the global economy, similar decisions will be made affecting communities all across the nation. Who will make these decisions? Will they be made by a few or by many? Convinced of the need for thoroughgoing political change, Hathaway concludes that such decisions must be made democratically—that workers must have a voice in their own future.

“Can Workers Have a Voice? is much more comprehensive than other studies of the reaction of workers to the process of deindustrialization, and it takes the workers’ perspective more fully into account. It emphasizes the elite role in deploying power in various forms and identifies such power usage convincingly. It is distinctive in the field.”—Kenneth M. Dolbeare, Evergreen State College

Dale A. Hathaway is Assistant Professor of Political Science at Butler University.