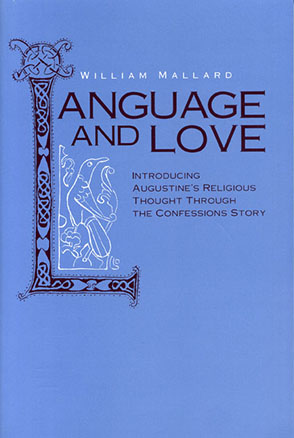 “This is a scholar’s book, surely, but obviously written to introduce a reasonably cultivated reader to Augustine’s whole thought-world, ‘through’ an explication of the Confessions.”—Robert J. O'Connell, Fordham University

This is the first work to combine an introduction to Augustine's Confessions with a larger outline of his mature theology. Mallard provides guidance for reading the narrative Confessions (Books I–IX) and at the same time, by certain extensions and comments, reveals the three major topical divisions within Augustine's thought: creation, salvation, and the City of God. Mallard is able to do this because Augustine's affirmation of the good of Creation, his view of the human will and God's grace (and the nature of evil), his sense of a religious people's identity and their hope, and his view of faith and reason were all essentially in place at the time of the Confessions.

Mallard argues that Augustine was not "in search of himself" in a modern sense but in search of a language of prayer, praise, and truth that would locate him within God's grace. That language turned out to be the language of Incarnation, which remains compelling and inviting today. As a classic work, the Confessions is a monument to its own time, but it has striking resonances for our own. Mallard's interpretation will challenge readers to begin working out their own.

The Confessions endures because it is a story that illumines the stories of many, even to the present day. To analyze how it is like, and unlike, modern experiences is to exercise both mind and heart. In that respect, Language and Love is a kind of theological meditation on the Confessions testing out a horizon of belief. Mallard views Augustine as a master of the spoken word in an age of broken and abused language and the Confessions as a historic masterpiece of rhetoric. He contends that Augustine is the ancestor of many today who offer social and political hope through fresh rhetorical vitality.

“This is a scholar’s book, surely, but obviously written to introduce a reasonably cultivated reader to Augustine’s whole thought-world, ‘through’ an explication of the Confessions.”—Robert J. O'Connell, Fordham University

William Mallard is Professor of Church History at the Candler School of Theology, Emory University, and author of The Reflection of Theology in Literature (1977).