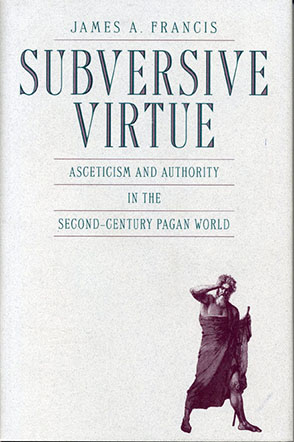 “Students of the Roman Empire no less than those who are interested in early Christianity will find Francis’s study requisite for comprehending the evolution of the pagan and Christian ascetic movements of late antiquity.”—Paul B. Harvey, Jr., Penn State University

Much attention has been devoted in recent years to Christian asceticism in Late Antiquity. But Christianity did not introduce asceticism to the ancient world. An underlying theme of this fascinating study of pagan asceticism is that much of the work on Christian "holy men" has ignored earlier manifestations of asceticism in Antiquity and the way Roman society confronted it. Accordingly, James Francis turns to the second century, the "balmy late afternoon of Rome's classical empire," when the conflict between asceticism and authority reached a turning point.

Francis begins with the emperor Marcus Aurelius (121–180), who warned in his Meditations against "display[ing] oneself as a man keen to impress others with a reputation for asceticism or beneficence." The Stoic Aurelius saw ascetic self-discipline as a virtue, but one to be exercised in moderation. Like other Roman aristocrats of his day, he perceived practitioners of ostentatious physical asceticism as a threat to prevailing norms and the established order. Prophecy, sorcery, miracle working, charismatic leadership, expressions of social discontent, and advocacy of alternative values regarding wealth, property, marriage, and sexuality were the issues provoking the controversy.

If Aurelius defined the acceptable limits of ascetical practice, then the poet Lucian depicted the threat ascetics were perceived to pose to the social status quo through his biting satire. In an eye-opening analysis of Philostratus's Life of Apollonius of Tyana, Francis shows how Roman society reined in its deviant ascetics by "rehabilitating" them into pillars of traditional values. Celsus's True Doctrine shows how the views pagans held of their own ascetics influenced their negative view of Christianity. Finally, Francis points out striking parallels between the conflict over pagan asceticism and its Christian counterpart. By treating pagan asceticism seriously in its own right, Francis establishes the context necessary for understanding the great flowering of asceticism in Late Antiquity

“Students of the Roman Empire no less than those who are interested in early Christianity will find Francis’s study requisite for comprehending the evolution of the pagan and Christian ascetic movements of late antiquity.”—Paul B. Harvey, Jr., Penn State University

James A. Francis is Visiting Assistant Professor of Classics at Rollins College.