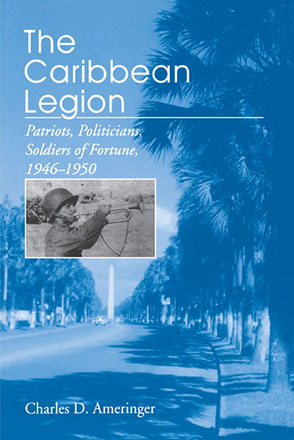 “With great competence and a sure hand, [Ameringer] synthesizes the scholarship on the Legion that has appeared since The Democratic Left in Exile, and he adds some new material based on the skillful use of United States documents.”—Piero Gleijeses, Journal of American History

A tale of adventure and intrigue, The Caribbean Legion studies the political struggles of the peoples of Costa Rica, Cuba, the Dominican Republic, Guatemala, Honduras, and Nicaragua in the years following World War II. Taking their inspiration from the D-day–style invasions of occupied Europe, groups of political exiles organized a series of armed expeditions that kept the Caribbean in turmoil for five years. Although their actions were independent, the groups became known collectively as the ''Caribbean Legion.''

Charles D. Ameringer examines the myth and reality of the Caribbean Legion, as well as the evolving foreign policy of the United States. Faced with the contradiction between the promotion of representative democracy and the principle of nonintervention, the United States tolerated dictatorship in the postwar Caribbean, which eventually led to serious consequences such as the Cuban Revolution.

Ameringer utilizes never-before-consulted documents from 1949 and 1950 on ''the situation in the Caribbean'' from the Inter-American Peace Committee of the Organization of American States. Accordingly, The Caribbean Legion presents new information and documentation on the difficulties, complexities, and costs of organizing armed uprisings from exile, the purposes and actions of pro-democratic Caribbean exiles and their allies and sponsors, and US policy toward Latin America in the early Cold War period.

“With great competence and a sure hand, [Ameringer] synthesizes the scholarship on the Legion that has appeared since The Democratic Left in Exile, and he adds some new material based on the skillful use of United States documents.”—Piero Gleijeses, Journal of American History

“This scholarly, well-written little book gives the Caribbean Legion the treatment it deserves. While the author has no illusions about the purity of the politicians behind the Legion, or about the motivation or competence of the soldiers of fortune it employed, he duly recognizes the democratic idealism that inspired it, and the dedication and sacrifice of the Caribbean patriots who donned its uniform.”—Neill Macaulay, Journal of Military History

“Professor Ameringer should be commended for such an exhaustively researched and provocative work. The book serves as a useful tool in interpreting post–World War II American diplomatic policy in the Caribbean and Central America, and is of inestimable value for those interested in the Caribbean Legion.”—José B. Fernández, Florida Historical Quarterly

Charles D. Ameringer is Professor Emeritus of History at Penn State University. His previous books include The Democratic Left in Exile: The Antidictatorial Struggle in the Caribbean, 1945–1959 (1974) and Don Pepe: A Political Biography of Jose Figueres of Costa Rica (1979).