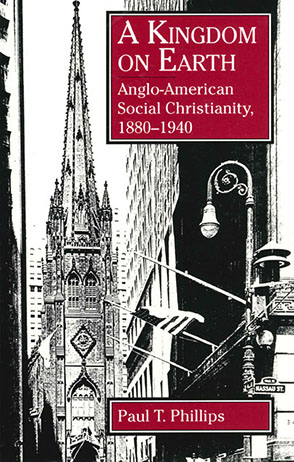 “One of the most important additions to the literature in decades.”Anglican and Episcopal History

Social Christianity was a major force in the life of the United States, Canada, and Britain for more than sixty years, beginning in the closing decades of the Victorian age. As a tide of concern swept through Protestantism in the face of mounting social ills, Social Gospelers and Christian Socialists urged a less competitive, more compassionate society. They pioneered in many fields of modern social science and actively engaged in social work and party politics. In A Kingdom on Earth, Paul T. Phillips provides an unusually broad view of the movement from both sides of the Atlantic. He is also unique in carrying the story up to 1940, thereby tying Social Christianity to the origins of the welfare state.

Using a wide range of sources, A Kingdom on Earth places the activities of Social Christians firmly in the social and cultural contexts of the day. Phillips's analysis reveals the dilemmas of a movement that sought to achieve social harmony and justice through close cooperation with secular reformism. Such dilemmas invariably led to rivalries with competing ideologies and brought secularizing influences into the churches themselves. In spite of these worldly aspects, however, Phillips finds that the inspiration and essence of the movement were essentially religious.

“One of the most important additions to the literature in decades.”Anglican and Episcopal History

“A major study of liberal Protestantism, [this book] will be a valuable source of useful information and analysis for many years to come.”Christian Scholar's Review

“An impressive contribution to the corpus of social Christian studies.”—Robert T. Handy,

Paul T. Phillips is Professor of History at St. Francis Xavier University in Nova Scotia. He is the author of The Sectarian Spirit: Sectarianism, Society, and Politics in Victorian Cotton Towns (1982) and Britain's Past in Canada: The Teaching and Writing of British History (1989).