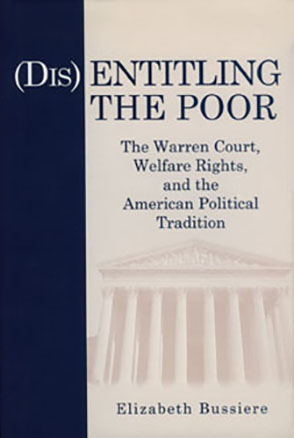 “Bussiere’s analysis is subtle, compelling, and timely. It will make a significant contribution to ongoing debates about law, judicial politics, and social welfare policy in the United States.”—Michael McCann, University of Washington

In 1989 the Supreme Court ruled that the State of Wisconsin was not liable for the brutal beating of a young boy by his father, who had been investigated by the Department of Social Services. In DeShaney v. Winnebago County Department of Social Services, Chief Justice William Rehnquist's majority opinion rejected the claim of the boy's mother that her son had been deprived of his constitutional "right to life." Taking the DeShaney case as her point of departure, Elizabeth Bussiere observes that the idea of a constitutional right to life was first rejected not by the conservative Rehnquist Court but by the liberal Warren Court twenty years earlier. She investigates why the Warren Court, despite its many rulings "entitling" the poor to constitutional protections, refused to identify welfare benefits (or subsistence) as a constitutional right.

Although focused on the Warren Court, the book explores Western political thought from the seventeenth through late twentieth centuries, draws on American social history from the Age of Jackson through the civil rights era of the 1960s, and utilizes current analytic methods, particularly the "new institutionalism." Finding cultural arguments regarding the absence of constitutional welfare rights inadequate, she illuminates two long-standing traditions—natural law and maternalism—that tended to support the poor's subsistence needs. The key to the failure of constitutional welfare rights, Bussiere argues, lay in an ironic turn in the development of legal doctrines. It was the fidelity of the liberal Warren Court to judicial doctrines that had been formulated in the late 1930s to prevent a conservative Court from defeating social-welfare programs that ultimately led the Warren Court to decline to "constitutionalize" a right to welfare. Her book is particularly timely given President Clinton's approval of a Republican-crafted law in 1996 ending public assistance as a statutory "entitlement''—a decision that might have been thwarted had the Warren Court ruled differently.

“Bussiere’s analysis is subtle, compelling, and timely. It will make a significant contribution to ongoing debates about law, judicial politics, and social welfare policy in the United States.”—Michael McCann, University of Washington

“Why . . . did the [Warren] Court refuse to make minimal subsistence a fundamental right or poverty a suspect class? Bussiere argues that the explanation lies not only in the constellation of external forces pressuring the Court but also in the Court’s institutional limits. . . . Bussiere’s study reveals the rich possibilities of the new institutionalism. . . . Careful historical studies, such as Bussiere’s, suggest that welfare policies are not determined by the economic and ideological pressures of capitalism alone. They are also the product of contingent factors such as litigation, political opportunism, social movements, and the evolution of complex patterns of institutionalization.”—Frank Munger, Law and Society Review

“A real analytic tour de force. It seamlessly weaves together a sophisticated understanding of American history, a subtle exposition of complex Supreme Court doctrines, and a hard-headed treatment of the realities of American politics.”—Jennifer Hochschild, Harvard University

Elizabeth Bussiere is Associate Professor of Political Science at the University of Massachusetts at Boston.