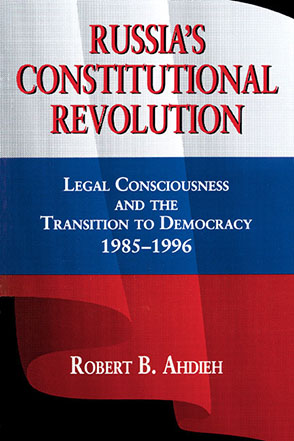 “Robert Ahdieh has provided an excellent, detailed account of the development of constitutionalism in the Soviet Union and Russia between 1985 and 1996.”—Edwin Bacon, International Affairs

Robert Ahdieh assesses here the troubled history and uncertain future of constitutionalism in post-communist Russia. He argues that the development of Russian constitutionalism and legal culture, long ignored as secondary to the economic and political transformation of the country, is critical to the survival of democracy.

Based on interviews with scholars, legal practitioners, and government officials intimately involved with the constitutional processes over the last decade, Ahdieh concludes that constitutionalism's emergence in Russia can occur only through an "evolution from below."

“Robert Ahdieh has provided an excellent, detailed account of the development of constitutionalism in the Soviet Union and Russia between 1985 and 1996.”—Edwin Bacon, International Affairs

“Although post-Soviet Russia is still young, it is not too early to begin writing its legal history. The author gained exceptional access to constitutional drafters in Russia and in this book has judiciously incorporated their observations into his careful reading of the relevant Western scholarship on the late USSR and the young Russian Federation.”—Robert Sharlet, Union College

“Events in Russia continually bear out Robert Ahdieh's emphasis on the centrality of constitutionalism, and of public involvement in its support, for the survival of economic and political reform. The book felicitously combines a lively, jargon-free style, a wide range of vital interviews in Russia, and thorough scholarship.”—Peter H. Juviler, Barnard College

Currently a student at Yale Law School, Robert B. Ahdieh is a graduate of the Woodrow Wilson School of International and Public Affairs, Princeton University. He has worked at the Gorbachev Foundation in Moscow and in the office of Zbigniew Brzezinski in Washington, DC.