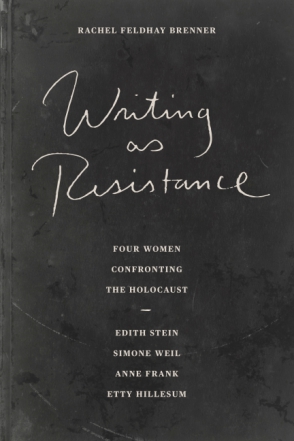 “Brenner writes a compelling book that is both informative and engaging. . . . Writing as Resistance is exactly what good work in the humanities should be: accessible yet challenging.”—Maurice Hamington, National Catholic Reporter

In this moving account of the life, work, and ethics of four Jewish women intellectuals in the world of the Holocaust, Rachel Feldhay Brenner explores the ways in which these women sought to maintain their faith in humanity while aware of intensifying destruction. She argues that through their written responses of autobiographical self-assertion, Edith Stein, Simone Weil, Anne Frank, and Etty Hillesum resisted the Nazi terror in ways that defy its horrifying dehumanization.

Personal identity crises engendered the intellectual-spiritual acts of autobiographical self-searching for each of these women. About to become a nun in 1933, Edith Stein embarked on her autobiography as a daughter of a Jewish family. Fleeing France and deportation in 1942, Simone Weil examined her inner struggle with faith and the Church in her "Spiritual Autobiography." Hiding for more than two years in the attic, Anne Frank poignantly confided in her diary about her efforts to become a better person. Having volunteered as a social worker in Westerbork, Etty Hillesum searched her soul for love in the reality of terror. In each case, autobiographical writing becomes an act of defiance that asserts humanity in a dehumanized/dehumanizing world.

By focusing on the four women's accomplishments as intellectuals, writers, and thinkers, Brenner's account liberates them from other posthumous treatments that depict them as symbols of altruism, sanctity, and victimization. Her approach also elucidates the particular predicament of Western Jewish intellectuals who trusted the ideals of the Enlightenment and believed in human fellowship. While suffering the terror of physical annihilation decreed by the Final Solution, these Jews had to contend with their exclusion from the world that they considered theirs. On yet another level, this study of four extraordinary life stories contributes to a deeper understanding of the postwar development of ethical, theological, and feminist thought. In showing concern about a world that had ceased to care for them, Stein, Weil, Frank, and Hillesum demonstrated that the meaning of human existence consisted in the responsibility for the other, in the protection of the suffering God, in the primary value of relatedness through empathy. Arguing that their ethical tenets anticipated the thought of such postwar thinkers as Levinas, Fackenheim, Tillich, Arendt, and Nodding, Brenner proposes that the breakup of the humanist tradition of the Enlightenment in the Holocaust engendered the postwar exploration of humanist potential in self-givenness to the other.

“Brenner writes a compelling book that is both informative and engaging. . . . Writing as Resistance is exactly what good work in the humanities should be: accessible yet challenging.”—Maurice Hamington, National Catholic Reporter

“Writing by women victims and survivors of Nazi persecution is discussed by scholars—if at all—largely as testimony, rarely as thought. . . . By looking at the thinking of Stein, Weil, Frank, and Hillesum, Brenner has helped to reverse this.”—Sara R. Horowitz, Modern Fiction Studies

“This is a book of great poignancy. Brenner catches the feminist, humanistic, and cultural milieu of the time and places it in the context of the Holocaust. She accomplishes this with such creativity that we are able to see the lives of her subjects with rare historical vividness.”—Michael Phayer, Marquette University

“Rachel Feldhay Brenner has written a stunning work of Holocaust hermeneutics, combining insights from a variety of disciplines including feminist thought, theology, ethics, and literature. Brenner's fresh and original insights reveal the essential connection between writing, resistance, and dedication to life in the face of absolute evil. Analyzing the writings of Edith Stein, Simone Weil, Anne Frank, and Etty Hillesum, Brenner skillfully reveals how each of these women chose to bear witness to an ethic of compassion amidst a nightmare of brutality and doom.”—Alan L. Berger, Chair of Holocaust Studies and Director of Judaic Studies, Florida Atlantic University

“This book is an engaging and, indeed, riveting account of how each of these women affirmed values of empathy, caring, and connectedness in her real-life choices as well as in her writings. Rachel Brenner succeeds wonderfully in penetrating the personal and ethical dilemmas of the women and in explaining how their prose grew out of and answered the overlapping crises in their own lives and their contemporary world. Writing about what Edith Stein called ‘empathy,’ Brenner has achieved just such an intimate comprehension of her subjects, and she effectively communicates her insights to her reader.”—Anne Carver Rose, Penn State University

Rachel Feldhay Brenner is Associate Professor of Modern Hebrew Literature at the University of Wisconsin–Madison. She is the author of Assimilation and Assertion: The Response to the Holocaust in Mordecai Richler's Writing and A. M. Klein, The Father of Canadian Jewish Literature: Essays in the Poetics of Humanistic Passion.