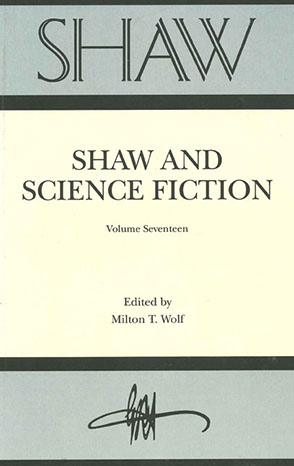 Susan Stone-Blackburn, comparing Shaw's Back to Methuselah with Olaf Stapledon's Last and First Men, discusses why science-fiction scholars have been reluctant to acknowledge Shaw's role in the genre. Tom Shippey examines aspects of Shaw's theory of Creative Evolution to show why many have dismissed Shaw's science fiction as insufficiently scientific.

Surveying the science-fiction milieu, Ben P. Indick shows that while Shaw was not interested in writing science fiction per se, he knew the genre and how to use it. Jeffrey M. Wallmann chronicles the science-fiction techniques that Shaw foreshadowed. Rodelle Weintraub analyzes dream-related elements of the fantastic that Shaw frequently employed in his drama. John Barnes focuses on Shaw's "radical superman," a stock-in-trade of science fiction.

Like H. G. Wells, Shaw understood that human intervention was becoming the dominant mechanism of evolution and that new approaches to theatrical drama would be required to convey the social and political impact of the scientific revolution. Elwira M. Grossman compares similar dilemmas facing Shaw and the Polish dramatist Witkacy. J. L. Wisenthal examines the utopian tradition that underlay the English literary experience, and Julie A. Sparks contrasts Karel Capek's anti-utopian concepts with Shaw's utopian vision. Also included is an 1887 lecture by Shaw entitled "Utopias," published here for the first time.

Several of the contributors emphasize the significant influence that Shaw had on major science-fiction writers. Elizabeth Anne Hull explores Shaw's affinities with Arthur C. Clarke, John R. Pfeiffer discusses the many connections between Shaw and Ray Bradbury, and George Slusser explores Shaw and Robert A. Heinlein's "recurrent fascination with the possibilities of life extension."

Like his friend Einstein, Shaw knew that imagination is more important than knowledge. Peter Gahan's article demonstrates that Shaw's ambition was to engage the reader's imagination, the only "sufficient backdrop for his vision."

Also included are reviews of recent additions to Shavian scholarship, including the Shaw/Wells correspondence, and John R. Pfeiffer's "Continuing Checklist of Shaviana."

FICTION WITH A HEART, A BRAIN, AND THE NERVE! 11

2. SHAW'S SCIENCE FICTION ON THE BOARDS 19

8. ON HIS SHOULDERS: SHAW'S INFLUENCE ON CLARKE'SCHILDHOOD'S END 107

10. LAST MEN AND FIRST WOMEN: THE DYNAMICS OF LIFE EXTENSION IN SHAW AND HEINLEIN 133

11. TROPICS OF A DESIRABLE OXYMORON: THE RADICAL SUPERMAN IN BACK TO METHUSELAH 155

12. SHAW FOR THE UTOPIANS, ČAPEK FOR THE ANTIUTOPIANS 165

13. SCIENCE AND SPIRITUALITY IN BACK TO METHUSELAH AND LAST AND FIRST MEN 185

14. SKEPTICAL SPECULATION AND BACK TO METHUSELAH 199

15. BACK TO METHUSELAH: AN EXERCISE OF IMAGINATION 215

THE WAR OF THE WORLD-BETTERERS (Selected

SHARDS OF SHAW (Shaw and Joyce: "The Last Word in

A CONTINUING CHECKLIST OF SHAVIANA 271