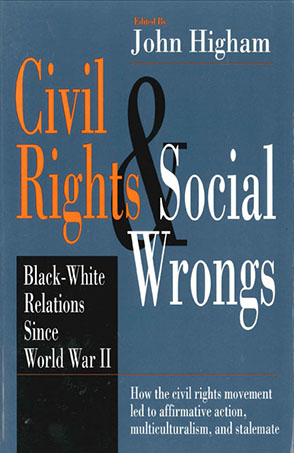 “John Higham and his colleagues deserve great praise for addressing problems of race and ethnicity in a manner that is frequently fresh and always constructive. We are indebted to them for sharing their views with a larger public.”—John Hope Franklin,

The persistence of racial inequality in a democratic society may be the gravest problem confronting the United States. It has surely been the most intractable. Yet the torrent of scholarship and comment unleashed in recent years by the question of race provides a general reader with little overall understanding of the solutions attempted and the resulting outcomes. These essays by ten leading scholars offer the most compact comprehensive appraisal we have of how the modern civil rights movement arose, what changes it brought about in relationships between blacks and whites, and how it led to affirmative action, to multiculturalism, and eventually to the present stalemate and discontent.

“John Higham and his colleagues deserve great praise for addressing problems of race and ethnicity in a manner that is frequently fresh and always constructive. We are indebted to them for sharing their views with a larger public.”—John Hope Franklin,

“A remarkably comprehensive and concise assessment of the complex path traveled by the civil rights movement since 1954. . . . No other work succeeds so admirably or so succinctly in explaining why, at the end of the twentieth century, race relations in the United States exhibit such deeply contradictory trends.”—Willard B. Gatewood, Journal of Southern History

“Through the insights of many of the country’s leading scholars of race relations, this book takes an honest look at the state of American race relations. The authors’ essays help the reader gain a deeper understanding of how we came to the current situation and how we can improve relations among the races in the future.”—Bill Bradley,

“This collection provides good verbal handles to discuss and understand the major questions Americans face as they explore living in a pluralistic and international society. This book is recommended for readers at all levels as an informative, provocative, and somewhat reassuring study.”Choice

John Higham is Professor of History Emeritus at The Johns Hopkins University and a past president of the Organization of American Historians. His books include Send These to Me: Immigrants in Urban America (1983) and Strangers in the Land: Patterns of American Nativism, 1860–1925 (1986).