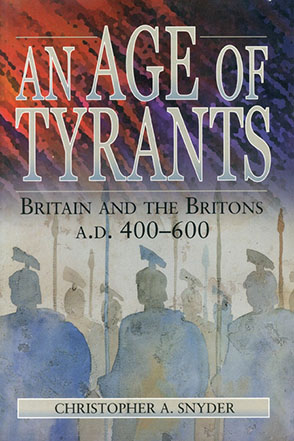 “An Age of Tyrants is a well-crafted and thoughtful survey of a little-known period of British history. It is an attractive book for lay readers and specialists alike.”—Frederick C. Suppe, Ball State University

An Age of Tyrants explores an obscure period in the history of the British Isles often referred to as Sub-Roman Britain. Such a label implies that social and cultural decline followed the end of Roman imperial control. But Christopher Snyder shows that Britain developed unique social, political, and religious institutions during this time.

Snyder's innovative approach involves analysis of both the written and archaeological record. Looking at contemporary writers such as Patrick and Gildas, he shows how the cultural and political landscape was changing during this period. By the waning years of the Roman Empire, Britain was earning a special reputation as a "province fertile with tyrants." These tyrants dominate the historical accounts of the fifth and sixth centuries and tell us much about the transition from magisterial to monarchical power in Britain.

Combining this with what we know from archaeology, Snyder reveals a society that was a hybrid of indigenous (Celtic), Mediterranean (Roman), and Christian elements that preceded the coming of the Anglo-Saxons. An appendix explores how Arthur and Merlin fit into this picture. Snyder's other important findings include:

• The military arrangements of the Britons owed much to both Roman and Celtic inspiration.

• The spread of Christianity (and especially monasticism) after 400 was swift and unhindered by paganism.

• The economy of Britain was not completely coinless and, indeed, was seemingly vigorous with the revival of trade with Gaul and the Mediterranean.

• The growing cultural antagonism between the Britons and the Saxons would have far-reaching consequences.

“An Age of Tyrants is a well-crafted and thoughtful survey of a little-known period of British history. It is an attractive book for lay readers and specialists alike.”—Frederick C. Suppe, Ball State University

Christopher A. Snyder is on the faculty of History and Politics at Marymount University in Arlington, Virginia. He is the author of Sub-Roman Britain (A.D. 400-600): A Gazetteer of Sites (1996).