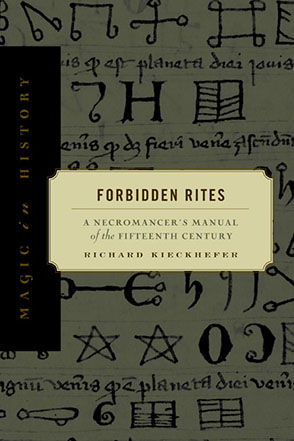 Preserved in the Bavarian State Library in Munich is a manuscript that few scholars have noticed and that no one in modern times has treated with the seriousness it deserves. Forbidden Rites consists of an edition of this medieval Latin text with a full commentary, including detailed analysis of the text and its contents, discussion of the historical context, translation of representative sections of the text, and comparison with other necromantic texts of the late Middle Ages. The result is the most vivid and readable introduction to medieval magic now available.

Like many medieval texts for the use of magicians, this handbook is a miscellany rather than a systematic treatise. It is exceptional, however, in the scope and variety of its contents—prayers and conjurations, rituals of sympathetic magic, procedures involving astral magic, a catalogue of spirits, lengthy ceremonies for consecrating a book of magic, and other materials.

With more detail on particular experiments than the famous thirteenth-century Picatrix and more variety than the Thesaurus Necromantiae ascribed to Roger Bacon, the manual is one of the most interesting and important manuscripts of medieval magic that has yet come to light.

“Forbidden Rites, in illuminating the continuities between the orthodox and the illicit, greatly enriches our knowledge of this period in which necromancy flourished.”—Jane E. Jenkins, ISIS

“This book is enormously important. Building on his previous work, especially Magic in the Middle Ages (Cambridge, 1989), the author develops his formative insights into the subject of religion and magic in the late Middle Ages and also offers an edition of a truncated, therefore authorless and titleless, fifteenth-century manuscript (in Munich Clm 849) of a magical handbook.”—Jeffrey Burton Russell, Church History

“This book provides a vivid and detailed picture of medieval magical practice from the inside. With his edition of the Latin text and thorough analysis which accompanies it, Professor Kieckhefer has made accessible the aims, intents, and mentalities of the medieval necromancer.”—Gillian Pritchard, Medieval History

“Forbidden Rites opens a window onto aspects of late-medieval religion and culture that have often been hidden in the shadows. The material is fascinating, the arguments compelling. . . . All told, this is one of the most important works on late medieval magic from one of its most perceptive historians.”—Rudolph Paul Almasy, Sixteenth Century Journal

“I was captivated . . . by Forbidden Rites, part of an excellent series under the rubric Magic in History; with wonderful wit and succinct contextual insights, Richard Kieckhefer has edited a German wizard’s grimoire, packed with spells for Prospero-like conjurations of phantom banquets and castles in the air, as well as complicated charms, many involving hoopoes, against all manner of ills.”—Marina Warner, Times Literary Supplement

Richard Kieckhefer is Professor of Religion and History at Northwestern University and an acknowledged expert on medieval magic and witchcraft. His publications include European Witch Trials: Their Foundations in Popular and Learned Culture, 1300–1500 (1976), Repression of Heresy in Medieval Germany (1979), Unquiet Souls: Fourteenth-Century Saints and Their Religious Milieu (1984), and Magic in the Middle Ages (1990).

The Sacred and the Sinister

Studies in Medieval Religion and Magic