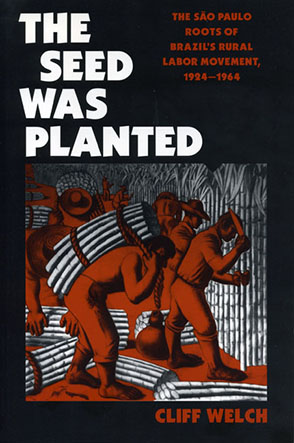 “Welch’s contribution to a critical revision of the history of rural workers at a watershed moment in the history of Brazil is well-informed, original, and extremely timely. It is this kind of detailed case study that will prove essential in the re-elaboration of our perspectives on labor’s capacity for autonomy, its limits, and its political implications.”—Viviana Patroni, Review Historique

A Choice Outstanding Academic Book for 1999

Until the 1960s, rural laborers and peasants composed the majority of Brazil’s population and yet most scholars have downplayed their influence on the country's history. In contrast, The Seed Was Planted argues that rural labor has been fundamental to the making of modern Brazil.

When the Brazilian military took power in 1964, anarchy in the countryside was one of the problems the conspirators used to justify ousting the civilian government. Cliff Welch examines this claim by narrating the history of rising rural worker activism in São Paulo, Brazil's most influential state.

Between a major revolt in 1924 and the 1964 coup d'etat, São Paulo rural workers gradually gained a place in Brazilian politics by seizing opportunities from ruling class initiatives designed to reform the agricultural economy. Welch shows how laws composed to incorporate rural workers in a controlled way became platforms for unexpected protest and political mobilization culminating in the 1963 Rural Laborer Statute (ETR). The unprecedented legitimacy the law brought the rural labor movement further spurred the agrarian mobilization cut short by the 1964 coup.

Drawing on rural worker letters, court records, news accounts, landlord observations, and government studies, The Seed Was Planted offers a rich and engaging sense of how rural labor politics were structured and experienced during this crucial period of modern Brazilian history. Personal anecdotes gathered in oral interviews with rural workers and their allies add a compelling human element to the book, enlivening such historical abstractions as communism, populism, and rural unionization. This combination of detailed historical analysis and lively personal narrative makes The Seed Was Planted an excellent introduction to modern Brazilian social history.

“Welch’s contribution to a critical revision of the history of rural workers at a watershed moment in the history of Brazil is well-informed, original, and extremely timely. It is this kind of detailed case study that will prove essential in the re-elaboration of our perspectives on labor’s capacity for autonomy, its limits, and its political implications.”—Viviana Patroni, Review Historique

“This is a pioneering work on a neglected topic, an important contribution to labor history, and a work whose argument historians of modern Brazil will be unable to ignore.”—Hendrik Kraay, Business History Review

“The Seed Was Planted is an expertly written chronological narrative, the result of more than twelve years of work by the author. Welch applies tireless care in the effort at authenticity, taking the reader through forty years of the São Paulo rural labor movement. What emerges is the drama of a very human experience, structured by the scholarly craft of the historian.”—Anthony R. Brunello, Perspectives on Political Science

“The book is a carefully crafted case study of rural labor politics in Ribeirão Preto in western São Paulo’s Alta Mogiana. . . . [Welch] has produced an admirable, outstanding piece of scholarship. Readers must study it themselves, as this review may not do justice to its richness.”—Luis A. Gonzalez, Journal of Interamerican Studies and World Affairs

“Cliff Welch has made a major contribution. He has helped restore the historical roots of the Brazilian rural movements and underlined their importance and complexity. . . . It should be emulated by historians of Brazil and also by those of other Latin American countries. It is a book well worth reading.”—Joel Horowitz, Labor History

Cliff Welch is Associate Professor of History and Coordinator of the Latin American Studies Program at Grand Valley State University in Michigan.