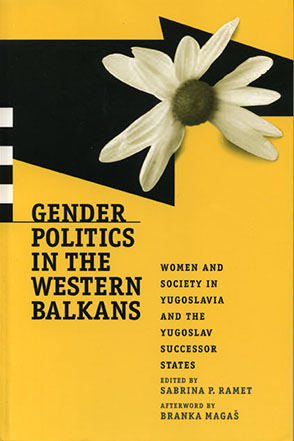 Gender Politics in the Western Balkans traces the development of women's consciousness in the lands of the South Slavs from the early years of the twentieth century, on the eve of the creation of the Kingdom of Serbs, Croats, and Slovenes, to the situation during and after the Serbian Insurrectionary War of 1991–95. The book embraces historical chapters, contemporary political analyses, and cultural studies (focusing on literature and religion).

Socialist Yugoslavia undertook a relatively unusual experiment during the forty-six years of its existence (1945–91)—to eliminate the sources of social, economic, and gender inequality while laying the foundation for a society in which women and men could enjoy complete equality in politics, in education and careers, and in family life. Although the aspiration was shared with other communist countries, Yugoslavia gave its experiment a unique twist by linking its program with institutional changes to be realized through self-management organs and a complicated delegate system. The socialist system represented an improvement where gender equality was concerned over the pre-existing system associated with the interwar Kingdom of Yugoslavia, but it did not fulfill its promises.

Recognizing the need for a book that surveys the experience of South Slav women during the twentieth century, Sabrina Ramet commissioned essays from leading scholars in East European/Yugoslav studies and women’s studies for this volume. The resulting collection is arranged in rough chronological order, covering primarily Slovenia, Croatia, Serbia, and Bosnia from before World War II until present day. Topics covered include the structures of traditional society, gender relations in the interwar period, anti-Fascist organizations, the socialist experience, and issues connected to post-socialist politics and the war, making this the most comprehensive and up-to-date book on the subject.

Sabrina P. Ramet, one of the leading Europeanists of the day, is Professor of International Studies at the University of Washington and a member of the Advisory Board of the Post-Communist Cultural Studies Series. She is the author of seven books, including Nihil Obstat: Religion, Politics, and Social Change in East Central Europe and Russia (1998).

Women of the Right

Comparisons and Interplay Across Borders