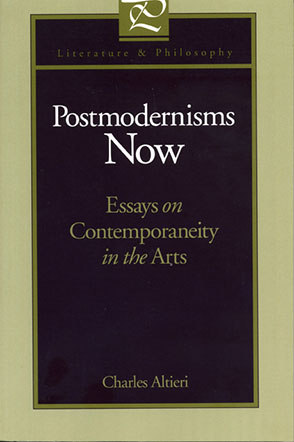 Altieri begins with an essay defining five basic contradictions in postmodern theory and outlining specific artistic strategies for dwelling with and within those contradictions. Part Two then sets the historical stage with two essays—one focusing on the efforts to overthrow late modernism by Jasper Johns and John Ashbery, the other tracing the emergence of a logic of contingency in the poetics of Robert Creeley, Frank O'Hara, and Sylvia Plath. With Part Three the focus shifts to essays proposing different value frameworks for postmodern poets, frameworks that range from moral philosophy to the resources of the tradition of love poetry. Part Four turns to visual artists first engaging the efforts to politicize the postmodern in the 1980s, then showing how Frank Stella's work can be put in dialogue with that of Jacques Derrida. Finally, the book swallows its own tail by proposing an argument that the only version of the sublime that today does not collapse into self-congratulation is the sublime of self-disgust.

Postmodernism Now holds out the possibility that the arts have been America’s richest negotiations of postmodernity, and it insists that criticism need not displace art into social allegories in order to develop their relevance to social life.

Charles Altieri is Professor of English at the University of California, Berkeley. His books include Painterly Abstraction in Modernist American Poetry: The Contemporaneity of Modernism (1989), in paperback from Penn State.