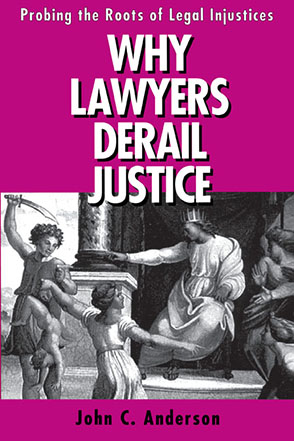 “In an excellent work on the American legal system, John C. Anderson holds modern legal theory as largely to blame for the gross injustices that he claims commonly occur.”—Brian J. Fox, Review of Metaphysics

The "rule of law" has become a shibboleth of American democracy, but the emphasis on procedural and abstract rather than substantive justice that is embedded both in the workings of our judicial system and in the writings of our leading philosophers of law, John Anderson argues, has led to much real injustice. This book draws inspiration from Aristotle's notion of "natural justice" found in communities based on ties of friendship to point the way toward a more humane practice of law.

Starting with concrete examples of injustice produced in our legal system, the author examines the distorting effects of legal argumentation and strategy on affirmative action, overzealous prosecutions, abusive enforcement of the tax code, sexual harassment litigation, and many other issues troubling our society. The jurisprudence of Ronald Dworkin, with his notion of a "community of principle," is identified as best articulating the justification for our current system and is subjected to a thorough critique from an Aristotelian perspective. Kant's "kingdom of ends" is located at the root of rights-based notions of justice and is also argued to be inadequate because it lacks the flexibility allowed by the classical understanding of epieikeia (equity).

What issues from this investigation of the faults of our present legal regime is a set of proposals for reform that include abolition of the legal profession and term limits for judges as well as politicians.

“In an excellent work on the American legal system, John C. Anderson holds modern legal theory as largely to blame for the gross injustices that he claims commonly occur.”—Brian J. Fox, Review of Metaphysics

“One shortcoming, if it may be called that, is that Anderson fails to situate the American legal system within the broader liberal political tradition. Though he is not explicit about it, Anderson’s real target, it seems to me, is the liberal political tradition—from at least Locke forward—of which the legal system, in its present state, is but one institutional manifestation of one form of liberalism. Notwithstanding this criticism, Anderson’s account of jurisprudential legalism and his critique of Dworkin’s jurisprudence alone make the book well worth the attention of all who, contrary to the sentiments of Justice Holmes, believe that law and justice need not be antithetical to each other.”—Kevin Pybas, Justice System Journal

John C. Anderson holds a law degree and a doctoral degree in philosophy from The Catholic University of America, and practiced law for five years in Washington, D. C. An independent scholar, he now works for the Army.