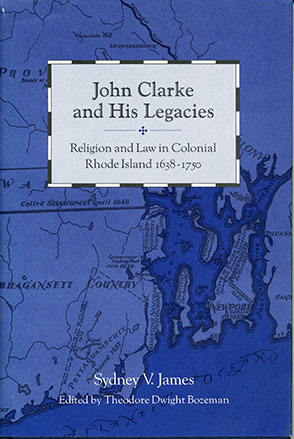 This inquiry into Clarke's life engages a variety of intriguing topics. It surveys a formative stage in American Baptist history, one that spurned dependency upon government more thoroughly than any part of the United States does today. Through the experience of Clark, we see pioneering American religious volunteerism, problems of church-state relations, and the peculiar nature of colonial relations with the parent country.

Sydney James was a senior American colonialist at the University of Iowa when he died in 1993. He was the author of A People Among Peoples: Quaker Benevolence in Eighteenth-Century America (1963) and Colonial Rhode Island: A History (1975).

T. Dwight Bozeman is professor of history at the University of Iowa. He is the author of Protestants in an Age of Science: The Baconian Ideal and Ante-bellum American Religious Thought (1977) and To Live Ancient Lives: The Primitivist Dimension in Puritanism (1988).