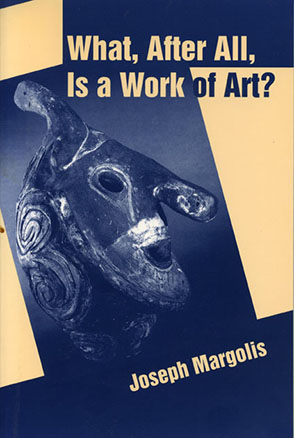 Margolis brings these primary themes to bear on a number of strategically selected issues: the modernism/postmodernism dispute; the treatment of modernist and "post-historical" painting in Clement Greenberg and Arthur Danto; the coherence of relativism in interpreting art and the relevance of cultural relativity; the difference between artworks and persons as culturally constituted entities in contrast to natural entities and with regard to the logic of interpretation; the import of film on the theory of the relationship between understanding ourselves and understanding art, with special attention to the views of Walter Benjamin; and the propriety of the analogy between artworks and selves, as cultural entities, by way of treating the arts (also history, action, and language) as a form of human "utterance."

Although the argument is largely focused on certain particularly strenuous puzzles in the philosophy of art, the validity of Margolis's claims are more far reaching. If, through incorporating the reality of physical and biological nature, the emergence of art and human selves cannot rest satisfactorily on exemplars selected from nature alone, then certain fashionable views of science, of canons of understanding, conceptual resources, logic, rationality, and the like may well have to yield ground to ampler models that have been largely marginalized or overridden. In particular, the admission of historicity, the nerve of Margolis's argument, invites a decisive conceptual reorientation.

What, After All, Is a Work of Art? is based on a series of lectures Margolis delivered at various universities in Japan in the Spring of 1997, while serving as a fellow of the Japan Society for the Promotion of Science.

Joseph Margolis is Laura H. Carnell Professor of Philosophy at Temple University and is the author of numerous books comparing the arts and the sciences. He is past president of the American Society for Aesthetics and Honorary President of the International Association of Aesthetics. Margolis edits for Temple the series The Arts and Their Philosophies and is also co-editor of the Series of the Greater Philadelphia Philosophy Consortium, published by Penn State University Press.

Selves and Other Texts

The Case for Cultural Realism