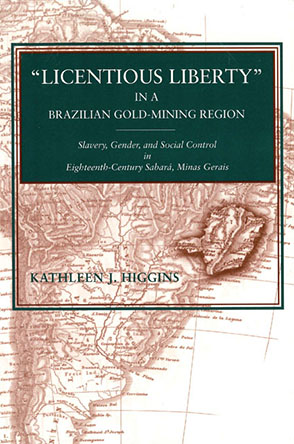 “[A] ‘must-read’ for all those interested in the African Diaspora and Brazilian slavery.”—Mary Karasch, Oakland University

To studies of Brazilian slavery, this book adds a new dimension by showing how it developed in a region where mining was the chief commercial activity and how important a role gender played in this frontier setting in creating opportunities for slaves to achieve some measure of autonomy, compared with slaves who worked in sugar-cane and coffee-growing areas.

The interactions among masters, slaves, and royal officials were profoundly shaped by the accessibility and widespread dispersal of gold deposits, the emergence of small urban centers in which commercial activities thrived, the sexual division of labor among slaves working in mining and commerce, and the changing sex ratio within the population of free white colonists settling in the region.

Focusing attention on the changing status, autonomy, and influence of non-White women, the author argues, is one of the most effective ways of understanding the economic, demographic, and cultural evolution of the slave society as a whole.

“[A] ‘must-read’ for all those interested in the African Diaspora and Brazilian slavery.”—Mary Karasch, Oakland University

“The author examines diverse secular and ecclesiastical administrative sources . . . to portray the social world of the slaves and slave owners of a typical 18th-century mining town, with special focus on religion, patterns of work, and relations between masters and slaves and men and women. Higgins is very attentive to the structural possibilities and limits on people’s lives, emphasizing how these differed according to age, sex, race, ability and historical circumstances.”British Bulletin of Publications On Latin America, Carribbean, Portugal and Spain

“This well-documented book will be widely read not only by historians and students of colonial Brazil but also by a wide range of scholars of New World slave systems and race relations. It will aptly be adopted as a textbook not only for graduate seminars on comparative slavery but also for many undergraduate courses in Brazilian and Latin America history and the African Diaspora studies, in which students will enjoy and learn from the book together with the illuminating Brazilian movie: Xica da Silva. ‘Licentious Liberty’ indeed helps us understand in what circumstances this ambitious slave woman became a concubine for a Portuguese diamond from Lisbon in early eighteenth-century Minas Gerais.”—Mieko Nishida, The Americas

“This is a challenging work that addresses significant questions, pushes our discussion about gender and slavery in colonial Brazil further, and expands our knowledge of the social history of Brazil’s mining communities. It fills in an important chapter in the history of colonial Brazil.”—Donald Ramos, Luso-Brazilian Review

“Kathleen Higgins’ Licentious Liberty is thoroughly researched in Minas archives, and the author also assiduously takes up comparisons and theoretical debates, generally in the extensive footnotes. She makes a solid case for the inclusion of gender in the analysis of slave societies, both for masters and among the servile population. . . . Licentious Liberty would be a useful addition to the readings in a course on slavery or colonial Brazil or on gender in colonial Latin America.”—David McCreery, Journal of Latin American Studies

“Focusing on Sabará, one of the principal mining towns, she draws a compelling portrait of the disorderly society generated by dispersed placer gold production.”—Hendrik Kraay, Latin American Research Review

“This book is a careful examination of how slavery worked in one of the societies of the New World most influenced by that institution. Higgins not only is sensitive to the ironies of the institution, but above all she pays attention to the way in which slaves responded to their situation and struggled to shape their own lives. We now have a book on slavery in the mining areas to match the studies done on plantation zones. It is sure to become a base point for future discussions of slavery in Minas Gerais.”—Stuart Schwartz, Yale University

Kathleen J. Higgins is Assistant Professor of History at the University of Iowa.