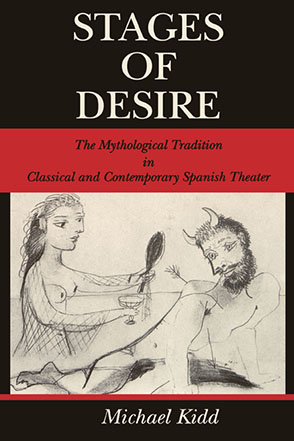 “This volume is a most welcome addition to the growing body of criticism on the mythological tradition in Hispanic letters.”—Denise DiPuccio, BCom

Within the rich tradition of Spanish theater lies an unexplored dimension reflecting themes from classical mythology. Through close readings of selected plays from early modern and twentieth-century Spanish literature with plots or characters derived from the Greco-Roman tradition, Michael Kidd shows that the concept of desire plays a pivotal role in adapting myth to the stage in each of several historical periods.

In Stages of Desire, Kidd offers a new way of looking at the theater in Spain. Reviewing the work of playwrights from Juan del Encina to Luis Riaza, he suggests that desire constitutes a central element in a large number of Greco-Roman myths and shows how dramatists have exploited this to resituate ancient narratives within their own artistic and ideological horizons. Among the works he analyzes are Timoneda's Tragicomedia llamada Filomena, Castro's Dido y Eneas, and Unamuno's Fedra.

Kidd explores how seventeenth-century playwrights were constrained by the conventions of the newly formed national theater, and how in the twentieth century mythological desire was exploited by playwrights engaged in upsetting the melodramatic conventions of the entrenched bourgeois theater. He also examines the role of desire both in the demythification of prominent classical heroes during the Franco regime and in the cultural critique of institutionalized discrimination in the current democratic period.

Stages of Desire is an original and broad-ranging study that highlights both change and continuity in Spanish theater. By elegantly combining theory, literary history, and close textual analysis, Kidd demonstrates both the resilience of Greco-Roman myths and the continuing vitality of the Spanish stage.

“This volume is a most welcome addition to the growing body of criticism on the mythological tradition in Hispanic letters.”—Denise DiPuccio, BCom

Michael Kidd is Associate Professor of Languages and Cross-Cultural Studies at Augsburg College.