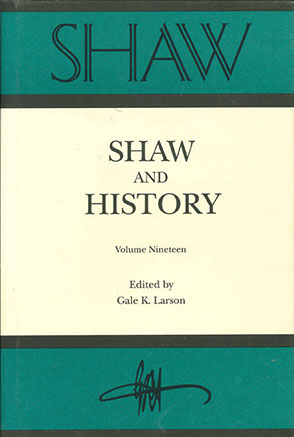 Stanley Weintraub discusses Shaw's references to Cetewayo, Zulu chieftain, in Cashel Byron's Profession as the first incorporation of a contemporary historical figure into his work.

John Allett explores the liberal, socialist, and radical feminist views of prostitution in nineteenth-century England and demonstrates how those political views are developed within the unfolding action of Mrs Warren's Profession.

Sidney P. Albert studies the Utopian movement, "The Garden City," to determine the extent to which that movement influenced Shaw's conception of Perivale St. Andres in Major Barbara. He also narrates his personal attempt to identify the Ballycorus smelting works and its surroundings as well as the campanile, or Folly, at Faringdon as sites that provided the scenic sources for Perivale St. Andres in Major Barbara.

Gale K. Larson has edited a partially unpublished Shavian manuscript that addresses Shaw's relationship with Frank Harris and, among other matters, sets the historical record right as to who deserves the credit for attributing the identity of the Dark Lady of the Sonnets to Mary Fitton. He also examines the historical sources that influenced Shaw's views on Charles II, the "Merry Monarch," in "In Good King Charles's Golden Days" and demonstrates Shaw's reclamation of yet another historical figure from the traditional historians.

David Gunby examines the first-night performance of O'Flaherty, V.C. for purposes of setting the historical record straight as to the facts of that production.

Wendi Chen presents the stage history of the production of Mrs Warren's Profession in China during the early 1920s and argues its central role in shaping modern Chinese drama.

Rodelle Weintraub assesses Too True to Be Good as a dream play within the context of the nightmarish times of World War I.

Michael M. O'Hara surveys the Federal Theatre's productions of Androcles and the Lion in the 1930s to reveal the political and religious repressions that those productions underscore.

MRS WARRENS PROFESSION AND THE POLITICS OF

THE FIRST SHAW PLAY ON THE CHINESE STAGE: THE

TOO TRUE TO BE GOOD: THE BOTTOMLESS ABYSS

FEDERAL THEATRE'S ANDROCLES AND THE LION: SHAW IN

BALLYCORUS AND THE FOLLY: IN SEARCH OF PERIVALE ST.

THE BURGUNDER SHAW COLLECTION ("The Instinct of an

Artist"/Shaw and the Theatre. An Exhibition from the Bernard F.

TWO BY SHAW (Bernard Shaw on Cinema, and Not Bloody Likely!

WRITINGS FOR "THE DREADED WEINTRAUB" (Shaw and

Other Matters: A Festschrift for Stanley Weintraub on the Occasion of

His Forty-Second Anniversary at The Pennsylvania State University,

A CONTINUING CHECKLIST OF SHAVIANA 187