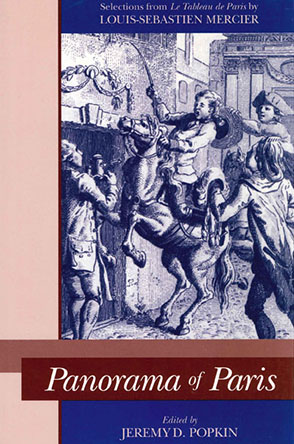 Earlier authors had described Paris's monuments and the lives of its wealthy elites, but Mercier was the first to try to capture in words the texture of its everyday life. His text, contemporary with Rousseau's Confessions, is the first attempt to write the autobiography of a unique urban community. His writing deeply influenced Balzac and other nineteenth-century French novelists and continues to serve as a major source of social and cultural history for French historians.

Panorama of Paris will fascinate all lovers of Paris and its history. It should be of special interest to students of French literature and history, and to anyone interested in the origins of modern attitudes toward city life.

Jeremy D. Popkin is Professor of History at the University of Kentucky. His books include Revolutionary News: The Press in France, 1789–1799 (1990) and A Short History of the French Revolution (1998).