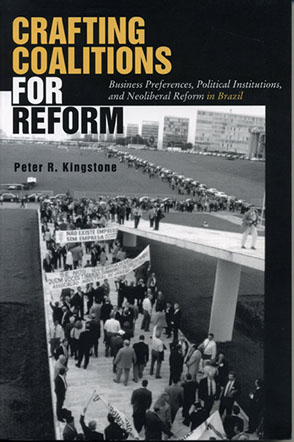 “This is a most important book which should be read by all those who have an interest in business politics, in the politics of neoliberal reform, and in the political economy of contemporary Brazil.”—Frances Hagopian, University of Notre Dame

The success of political efforts to create a more open economy in Brazil over the past decade has depended crucially on support from the industrial sector, which long enjoyed the benefits of protection by the state from economic competition. Why businesses previously so sheltered would back neoliberal reform, and why opposition arose at times from sectors least threatened by free trade, are the puzzles this book seeks to answer.

Drawing on more than one hundred interviews with industrialists and business association representatives, as well as a wide range of other sources, Peter Kingstone argues that the key to understanding the behavior of industrialists lies in the impact of four factors on their preferences for reform: the effect of economic crisis on industrialists' perception of the viability of the earlier development model; the sectoral location of their firms in the economy and the advantages historically accruing therefrom; the adjustment options available to them given their position in the market; and the credibility of the government's promises about reform and its tactical choices for getting them implemented through the political system.

The mix of these four factors, Kingstone shows, left business preferences relatively malleable and thus available for support of reform, even in the face of potentially high costs. Whether such support was forthcoming depended on industrialists' perceptions of the ability of government leaders to deliver on their promises. Widespread resistance to reform occurred when leaders lost their credibility. Under Fernando Collor's leadership, that credibility was never recovered; under Fernando Henrique Cardoso's, it was recovered through increasing concessions to industrialists on the character of the reform program.

“This is a most important book which should be read by all those who have an interest in business politics, in the politics of neoliberal reform, and in the political economy of contemporary Brazil.”—Frances Hagopian, University of Notre Dame

“In a highly organized book, Kingstone examines Brazilian industry’s support for the neoliberal reforms of the 1990s, arguing that this turnaround was shaped less by competitiveness than by public policy and political credibility. Based on hundreds of interviews with business executives, the book systematically analyzes different sectors—from pulp and paper to auto parts to machine tools—and examines the shifting opinions within industry lobbying associations. . . . An important contribution to the study of Brazil’s struggle for reform.”—Kenneth Maxwell, Foreign Affairs

“This book provides a valuable record of the ‘crisis of the state’ showing how fiscal, constitutional and inflationary pressures contributed to the breakdown of past business support for the state, opened space for new growth and organizational strategies.”—Mahrukh Doctor, Latin American Studies

“Overall, though, this work is a worthy and thoughtful addition to the literature on the impact of Brazilian business on the nation’s destiny, as well as on the interaction between Latin American business and neoliberal reform.”—Richard Downes, Luso-Brazilian Review

“An enduring puzzle for Latin Americanists is how freemarket, neoliberal economic reform was possible. . . . In this excellent new book, Peter Kingstone addresses the puzzle directly and effectively. He frames it as follows: ‘After fifty years of protection and nurturing by the state, observers of Brazilian political economy would have expected Brazilian industrialists to actively oppose the reform process’ (p. 1). In the end, however, Kingstone documents that business was much more flexible when facing reform, and under certain circumstances it was quite willing to endorse and support economic reform.”—Jeffrey Cason, American Political Science Review (APSR)

Peter R. Kingstone is Assistant Professor of Political Science at the University of Connecticut. He is co-editor, with Timothy Power, of Democratic Brazil: Actors, Institutions, and Processes (1999).