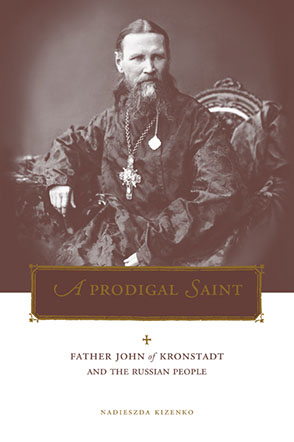 “A powerful and multidimensional portrait of the controversial Father John of Kronstadt, presented against the backdrop of Late Imperial religious life. Drawing on a rich source base, Kizenko offers an impartial and balanced interpretation of this pivotal figure. Reading this book is like stepping back into the world of a century ago, seeing the concerns, both material and spiritual, which occupied people’s lives.”—Eve Levin, Ohio State University

Rarely are we privileged to see the making of a saint, but it is just what this book gives us for John of Kronstadt (1829–1908), a major figure in the religious life of Late Imperial Russia. So popular was Father John during his years of ministry that Kronstadt became a pilgrimage site replete with peddlers selling souvenir photographs, postcards, and commemorative mugs.

A Prodigal Saint follows Father John’s development from activist priest to venerated spiritual leader and, after his death, to his elevation to sainthood in 1990. We see both the inner life of an aspiring saint and the symbiotic relationship between a living icon and his followers.

Father John represented a fundamentally new type of religious behavior and a new standard of sanctity in Late Imperial Russia. He ministered to the poor of Kronstadt, creating shelters and employment programs and participating in the temperance movement. In the process he acquired a reputation for prayerful intercession that soon spread beyond Kronstadt. When he was asked to minister to the dying Alexander III in 1894, his fame became international as he attracted correspondents from the United States and Europe. In his later years he allied himself increasingly with the radical right, which has had momentous implications for the Russian Orthodox Church in the twentieth century.

Kizenko draws upon rich and virtually unknown documents from the Russian archives, including Father John’s diaries, thousands of letters he received from his followers, and the police reports on the sect that formed around him. John’s diaries are a truly unique source, for they document the making of a modern saint: his struggles with doubt, his ascetic practices, and his growing realization that others saw him as a saint. Kizenko explores the extent to which Father John collaborated in the formation of his own cult and how he himself was influenced by the expectations and desires of his audience. In the final chapter she follows Father John’s posthumous reputation (and the struggles over how to use that reputation) in Russia, the Soviet Union, and throughout the world. A Prodigal Saint is published in collaboration with the Harriman Institute at Columbia University as part of its Studies of the Harriman Institute series. It is a pioneering study that contributes to our understanding of lived religion, saints’ cults, and modern Russian history.

“A powerful and multidimensional portrait of the controversial Father John of Kronstadt, presented against the backdrop of Late Imperial religious life. Drawing on a rich source base, Kizenko offers an impartial and balanced interpretation of this pivotal figure. Reading this book is like stepping back into the world of a century ago, seeing the concerns, both material and spiritual, which occupied people’s lives.”—Eve Levin, Ohio State University

“Kizenko manages to intertwine biography, socio-political analysis, theological discussion and Church history to produce a clear and captivating book on a subject that has suffered from a dearth of academic attention.”—Argyrios K. Pisiotis, H-Russia

“This study is exemplary in its approach to the phenomenon of sanctity and, to my knowledge, the first one of such a scholarly caliber on Russian sanctity in particular. It is a ‘must read’ for anyone who would go beyond Dostoevsky’s novels for an understanding of Russian Orthodoxy.”—Arkadi Choufrine, Koinonia: The Princeton Theological Seminary Graduate Forum

“This book is part of a growing literature on one of the most important but neglected aspects of Imperial Russia. It offers us an understanding of a complex and charismatic figure and the world in which he operated. It helps break down many of the simplistic assumptions about religion and it sets Russia in its European context. It is a very welcome addition to the literature.”—Shane O’Rourke, Journal of Religious History

“In this beautifully written biography of Father John (Ioann Il’ich Sergiev) of Kronstadt (1829–1908), Nadieszda Kizenko presents a remarkably sensitive and balanced portrait of this central figure of the Orthodox Church in late imperial Russia. . . . Kizenko’s biography demonstrates the power and importance of Orthodoxy and Orthodox religiosity at the end of the empire. . . . [A Prodigal Saint] will be a valuable addition to the library of anyone interested in European Christianity.”—Eugene Clay, Journal of Modern History

“In the end I learned a great deal from this work, which to my mind has gone a long way toward explaining the endurance and transformation of supernatural authority in fin-de-siecle Russia.”—Gary Marker, Slavic and East European Journal

“Kizenko has given us a highly perceptive and eminently readable study of a man and a time that are easily misunderstood. . . . This is not a book for beginners; Kizenko presupposes some prior knowledge both of the Russian Church and Russian history. Her translations from the Russian are smooth and idiomatic, and considering the complexities of the subject, she is always clear. . . . Kizenko has set a standard that others in the field would do well to follow.”—Peter Eaton, Anglican Theological Review

Nadieszda Kizenko is Assistant Professor of History at the University of Albany. She has contributed articles to Russian Review, Pravoslavnaia Rus', PSALM Notes, Russkoe Vozrozhdenie, and Peace and Change.