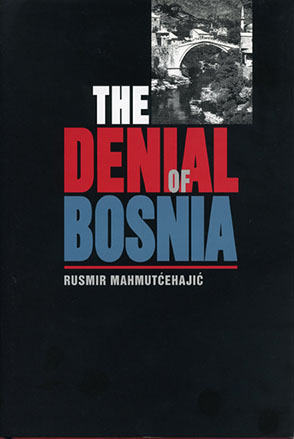 In 1997, Rusmir Mahmutćehajić, one of Bosnia’s leading public intellectuals, was scheduled to lecture on Bosnia at Stanford University but was unexpectedly denied an entry visa by American authorities. This book, first published in Bosnia in 1998, is an expanded version of that lecture. It is an indictment of the partition of Bosnia, formalized in 1995 by the Dayton Accord. It is also a plea for Bosnia’s communities to reject ethnic segregation and restore mutual trust. For the first time, English-speaking readers can hear this important voice of dissent from within Bosnia-Herzegovina.

Mahmutćehajić (pronounced “ma-moot-che-HI-itch”) argues for the history and reality of a Bosnia-Herzegovina based upon a model of “unity in diversity.” He shows that ethnic and religious cultures have coexisted in Bosnia for centuries. Partitioning of Bosnia, therefore, should have been unthinkable except that a multi-ethnic, multi-faith Bosnia stood squarely in the way of Croatian and Serbian leaders determined to enact their own nationalist programs. The decisive moment came when the international community accepted the Serb-Croat argument that ancient ethnic hatreds were endemic to Bosnia. At that point, ethnic segregation became not only acceptable but desirable. With the complicity of Western powers, Serbs and Croats proceeded to carve out ethnically cleansed states. Mahmutćehajić examines the reasons why Western liberal democracies have regarded with sympathy the struggles of Serbia and Croatia for national recognition, while viewing Bosnia’s multicultural society with suspicion. As one of Bosnia's former political leaders in the early peace talks, he describes with authority how the parties were often physically aligned during formal talks, with Bosniak negotiators on one side of the table and everybody else—Serb, Croat, and international representatives—on the other. In the end, justice was subverted and the final solution justified on the basis of an intractable “conflict of civilizations."

Mahmutćehajić confronts the religious dimension of the Bosnian dilemma with refreshing honesty. As a Bosniak committed to interreligious dialogue, he calls for more than simple toleration among Serbs, Croats, and Bosnians. He remembers that Judaism, Christianity, and Islam all share the same deity, and it is this common transcendent perspective that should open the door to the acceptance and celebration of religious diversity. Only in this way will Bosnia reclaim its unique civilization.

The Denial of Bosnia has dire implications for the future of a Europe searching for a viable post–Cold War order. Will Europe accept ethnic segregation as a solution to the contradictions of ethnic diversity or find a way to protect and build upon this diversity? Bosnia, though currently divided and shaken to its foundations, could become a model for European progress. The greatest danger is for Bosnia to be declared just another ethnoreligious entity, in this case a “Muslim State” ghettoized inside of Europe. If protected and allowed to develop, however, Bosnia too could find a place in the new European order.

“For many outsiders, Bosnia has already been virtually relegated to the backwaters of recent history, as genocide gave way to uncertain peace, and the stage set gradually moved southward to Kosovo. But in The Denial of Bosnia, a portrayal of the attempted destruction of Bosnia and Herzegovina by forces internal and external, Rusmir Mahmutcehajic demonstrates, through the close interweaving of philosophical, political, and theological discourse, the dangers still inherent in the international real politic approach to Bosnia and, conversely, Bosnia’s pivotal role in a new, and potentially more humane, social order. In this rich and multifaceted work, the author captures the essence of Bosnia, while reaching beyond it in his analysis of the forces which combined in an attempt to destroy it.”—Carole Hodge, University of Glasgow

“Mahmutcehajic’s passionate treatise on the history and fate of Bosnia is both a bitter denunciation of Milosevic’s and Tudjman’s destruction and division of Bosnia and an eloquent voice of dissent within Bosnia that has long needed to be heard. . . . Mahmutcehajic forces readers to examine anew the nature of religious conflict in Bosnia, positing that the country’s destruction was not the result of religious conflict; instead, he argues, the conflict is ‘a political betrayal of religion’ (whose ‘core elements can be seen as transcending division and conflicts’).”Publishers Weekly

“Rusmir Mahmutcehajic’s essay makes a singular and vital contribution to the understanding of the Bosnian War. . . . Mahmutcehajic writes from a privileged vantage point that endows his essay with a particular authority. . . . In sum, Mahmutcehajic’s essay is an incisive and invaluable addition to the literature on a war that still disturbs and puzzles many. It is highly relevant to scholars of the region as well as analysts of the international system, especially given the importance of competing conceptions of community in the current volatile climate.”—David Campbell, Slavic Review

Rusmir Mahmutćehajić is one of Bosnia's leading public intellectuals. A dissident during the Communist years, he was elected Vice President of the Bosnia-Herzegovina Government in 1991, serving under Alija Izetbegovic and holding the post of Minister of Energy, Mining, and Industry. He played a critical role in attempts to gain international recognition for Bosnia-Herzegovina but resigned from all government functions at the end of 1993, in protest against the acceptance by the greater part of the political establishment that Bosnia should be divided into ethnic parts.

Since then he initiated the founding of the International Forum 'Bosnia' a non-government organization that brings together the leading intellectuals of Bosnia and Herzegovina, in the effort to create and strengthen a civil society founded on dialogue and trust, human rights and the rule of law.