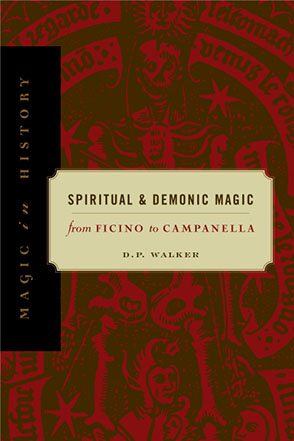 “Spiritual and Demonic Magic remains the basis of contemporary scholarly understanding of the theory of magic in postmedieval Europe.”—Brian Copenhaver, UCLA

First published by the Warburg Institute in 1958, this book is considered a landmark in Renaissance studies. Whereas most scholars had tended to view magic as a marginal subject, Walker showed that magic was one of the most typical creations of the late fifteenth and sixteenth centuries.

Walker takes readers through the magical concerns of some of the greatest thinkers of the Renaissance, from Marsilio Ficino, Giovanni Pico della Mirandola, and Jacques Lefevre d’Etaples to Jean Bodin, Francis Bacon, and Tommaso Campanella. Ultimately he demonstrates that magic was interconnected with religion, music, and medicine, all of which were central to the Renaissance notion of spiritus.

Remarkable for its clarity of writing, this book is still considered essential reading for students seeking to understand the assumptions, beliefs, and convictions that informed the thinking of the Renaissance. This edition features a new introduction by Brian Copenhaver, one of our leading experts on the place of magic in intellectual history.

“Spiritual and Demonic Magic remains the basis of contemporary scholarly understanding of the theory of magic in postmedieval Europe.”—Brian Copenhaver, UCLA

D. P. Walker (1914–1985) was trained at Oxford and spent most of his career at the Warburg Institute of the University of London. His other books are The Decline of Hell (1964), The Ancient Theology (1972), and Unclean Spirits: Possession and Exorcism in France and England in the Late Sixteenth and Early Seventeenth Centuries (1981).