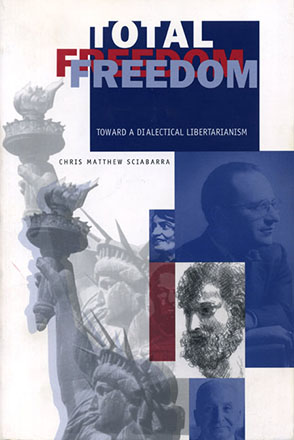 Building upon his previous books about Marx, Hayek, and Rand, Total Freedom completes what Lingua Franca has called Sciabarra’s "epic scholarly quest" to reclaim dialectics, usually associated with the Marxian left, as a methodology that can revivify libertarian thought. Part One surveys the history of dialectics from the ancient Greeks through the Austrian school of economics. Part Two investigates in detail the work of Murray Rothbard as a leading modern libertarian, in whose thought Sciabarra finds both dialectical and nondialectical elements. Ultimately, Sciabarra aims for a dialectical-libertarian synthesis, highlighting the need (not sufficiently recognized in liberalism) to think of the "totality" of interconnections in a dynamic system as the way to ensure human freedom while avoiding "totalitarianism" (such as resulted from Marxism).

“Total Freedom is a first-rate contribution to social theory and the enduring political project of a free and humane society.”—Peter Boettke, Author of Why Perestroika Failed: The Politics and Economics of Socialist Transformation

“Total Freedom marks out a unique, and philosophically and intellectually sophisticated argument for libertarianism. A short review focused on the Austrian elements in the book cannot [do] justice to the breadth and depth of Sciabarra’s scholarship, nor to the subtlety of his arguments. For those whose interests encompass both Austrian economics and political philosophy, as well as those doing Hayek scholarship, this book is a must-read, even if the historical work on dialectics in the first half is somewhat abstract and slow-going. Sciabarra’s understanding of Austrian economics is first-rate and this path-breaking application of those ideas to both dialectical philosophy and a new set of foundations for libertarian political philosophy is a perspective that will demand our attention in the years to come.”—Steven Horwitz, Review of Austrian Economics

“Chris Sciabarra’s Total Freedom is an astonishing work, astonishing in the depth and breadth of its scholarship, in its evidence of the use of the dialectic process by philosophers such as Aristotle, in its discovery of dialectics in the work of economists such as Murray Rothbard, and—most of all—in the firsthandedness of its author. Unlike so many other scholars and historians, Sciabarra looks at the history of philosophy through his own eyes and his own understanding. As a result, this beautifully and clearly written book will make the reader reexamine the history of philosophy and the history of dialectics by means of a new epistemological perspective: the perspective of dialectics. Total Freedom is a landmark in philosophical studies and interpretation.”—Barbara Branden,

Chris Matthew Sciabarra has been a Visiting Scholar in the Department of Politics at New York University since 1989. His previous publications include Ayn Rand: The Russian Radical (Penn State, 1995), Marx, Hayek, and Utopia (1995), and Feminist Interpretations of Ayn Rand (edited with Mimi Reisel Gladstein, Pen State, 1999).