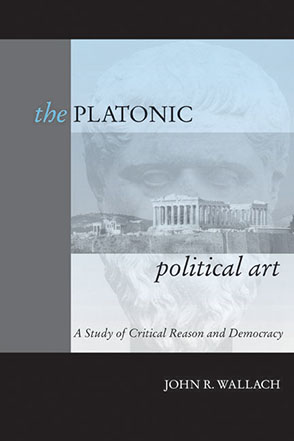 In this first comprehensive treatment of Plato’s political thought in a long time, John Wallach offers a "critical historicist" interpretation of Plato. Wallach shows how Plato’s theory, while a radical critique of the conventional ethical and political practice of his own era, can be seen as having the potential for contributing to democratic discourse about ethics and politics today.

The author argues that Plato articulates and "solves" his Socratic Problem in his various dialogues in different but potentially complementary ways. The book effectively extracts Plato from the straightjacket of Platonism and from the interpretive perspectives of the past fifty years—principally those of Karl Popper, Leo Strauss, Hannah Arendt, M. I. Finley, Jacques Derrida, and Gregory Vlastos.

The author’s distinctive approach for understanding Plato—and, he argues, for the history of political theory in general—can inform contemporary theorizing about democracy, opening pathways for criticizing democracy on behalf of virtue, justice, and democracy itself.

“One may disagree with Wallach’s critical judgments, with his theoretical constructivism, or with the critical historicism that defines his interpretative approach. But one cannot help being pushed to think harder and deeper by a book that is so consistently enlightening, stimulating, and informed.”—Peter Euben, University of California, Santa Cruz

“The Platonic Political Art is a learned, politically and theoretically ambitious, hugely bibliographic work. Its arrival will be welcomed by students of contemporary debates about democracy, especially those who try to glean insights from parallels drawn to ancient Athenian democracy—a literature that has grown in recent years.”—Gregory Bruce Smith, Canadian Journal of Political Science

“In The Platonic Political Art, a book that every political theorist interested in Greek thought will certainly want to read, John Wallach argues powerfully that the search for a true ‘political art’— a master techne that would unite politics with ethics, governance with living well—stands at the center of Plato’s moral philosophy.
It is the great success of Wallach’s passionate and erudite account of the Platonic political art that it presents today’s political theorists with a complex and rebarbative Plato, a crucial thinker who is in no simple sense an enemy of democracy, and who is entirely worth the trouble of reading with great care and close attention to history.”—Josiah Ober, Polis

“Notwithstanding these difficulties, Wallach’s book is clearly written, encompasses an impressive breadth of historical and philosophical material, and strenuously engages a mountain of recent and not so recent scholarly debate about Plato. . . . In the measure that Wallach succeeds in problematizing a widespread tendency to read Plato through the analytic or radically historicizing lenses developed especially during the last century, his book deserves serious consideration and makes an important contribution.”—Aristide Tessitore, American Political Science Review (APSR)

“If for no other reason, this book is worth reading for the attention Professor Wallach affords the methods of interpretation.”—Richard G. Avramenko, Review of Metaphysics