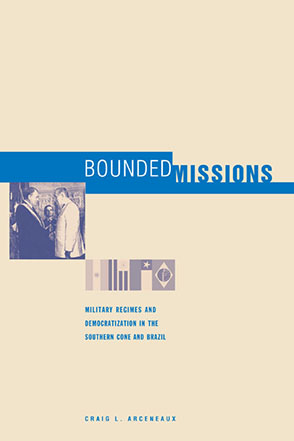 “Bounded Missions presents a well-argued, original argument about why military regimes in Brazil and the Southern Cone exhibited widely varying abilities to control the transition to civilian rule. It is a good example of a new wave of historical-institutional scholarship that is providing new answers to important questions about politics.”—Anthony W. Pereira, Tulane University

Scholars of Latin American politics have been challenged to account for the varied outcomes of the transitions from authoritarian to democratic government that have occurred in many countries south of the border during the past two decades. What explains why some transitions were relatively smooth, with the military firmly in control of the process, while others witnessed substantial concessions by the military to civilian leaders, or even total military collapse? Rather than focus on causes external to the military, such as the previous legacy of democratic rule, severe economic crisis, or social protest, as other scholars have done, Craig Arceneaux draws attention to the important variables internal to the military, such as its unity or ability to coordinate strategy. Using this "historical-institutionalist" approach, he compares five different transitions in Brazil and three countries of the Southern Cone—Argentina, Chile, and Uruguay—to show what similarities and differences existed and how the differences may be attributed to variations in the internal institutional structure and operation of the military.

“Bounded Missions presents a well-argued, original argument about why military regimes in Brazil and the Southern Cone exhibited widely varying abilities to control the transition to civilian rule. It is a good example of a new wave of historical-institutional scholarship that is providing new answers to important questions about politics.”—Anthony W. Pereira, Tulane University

“. . . there is a dearth of case studies of military rule and its impact on democratization. This excellent book fills the gap. . . .”—M. E. Carranza, Choice

“This book provides a solid contribution to our understanding of regime transitions, although from an unusual perspective: that of the armed forces of an outgoing dictatorship. Since its inception, the literature on democratization has argued that modes of regime transition (and the actors empowered during this process) have a substantial impact on the success and quality of a new democracy. Craig Arceneaux's central insight is that who retains control of the process in a transition from a military dictatorship depends to a great degree on the cohesion of the armed forces and the coherence of their economic and political strategy. To establish this proposition, Arceneaux adopts an institutionalist approach to examine five cases of transition in South America, all drawn from the period of prolonged military rule that characterized the region during the 1960s and 1970s. . . . Given the paucity of studies focusing on this level of analysis of authoritarian regimes, each of the country cases analyzed in this book represents a valuable contribution in and of itself to our understanding of this period in Latin American politics.”—Harold A. Trinkunas, American Political Science Review (APSR)

“Ranging from revolution in Argentina to the controlled transition in Brazil, Bounded Missions offers extensively researched and detailed data, all while drawing erudite and insightful conclusions on the history and future of nations. Bounded Missions is highly recommended for Latin American Studies, Political Science, and Military History reference collections and supplemental reading lists.”Midwest Book Review

“The systematic discussion and comparison of five of the most-studied military regimes in South America makes this a valuable addition to the libraries of area specialists.”—Jeanne K. Giraldo, Political Science Quarterly

“The author has undertaken a mammoth task, and completed it well. Bounded Missions makes a worthy case for restoring civil-military relations to a central position in policy analysis.”—Claude Welch, SUNY-Buffalo

Craig L. Arceneaux is Assistant Professor in the Department of Political Science at the California State Polytechnic University, San Luis Obispo. His articles have appeared in Armed Forces and Society, Comparative Political Studies, Bulletin of Latin American Research, and Journal of Political and Military Sociology.