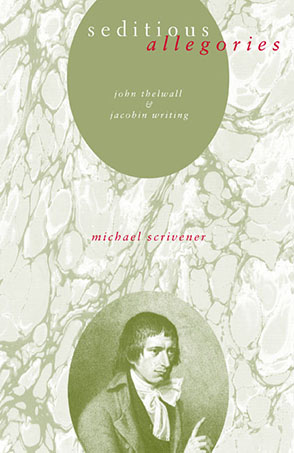 “This is a fine study of a leading democratic politician and important literary figure . . . [which] is in every respect well written.”—Gregory Claeys, University of London

The multifaceted career of John Thelwall (1764-1834)—poet, novelist, playwright, journalist, politician, scientist—is the lens through which we are offered here a new look at the phenomenon of British Jacobinism, long distorted by the critical view of it as intellectually weak bequeathed to us by Coleridge and Wordsworth, once Jacobins themselves. This book, the first on Thelwall in almost one hundred years, combines literary analysis and historical description to show how this innovative political activist remained true to his radicalism while adapting his methods in the face of the anti-Jacobin reaction that Paine's The Rights of Man helped set off.

The three parts of the book set Thelwall's achievements and challenges in the political and literary context of his times. Part One, "Jacobin(s) Writing," focuses on the most essential aspects, ideologically and formally, of the insurgent writing of the 1790s to which Thelwall contributed. Part Two, "The Voice of the People," treats both Thelwall's radical oratory and journalism, as well as his writings and activities as a natural scientist and rhetorician, a professor and technician of "elocution." Part Three, "Jacobin Allegory," expounds on Thelwall's characteristic strategy of indirect expression through synecdoche and allegory, which he used in his later career after repression forced him out of politics.

Through Thelwall's life Michael Scrivener succeeds in revealing how British Jacobinism reshaped the public sphere, initiating numerous literary experiments with oratory, pamphlets, periodicals, popularizations, and songs in the spaces opened up by political associations, lectures, meetings, and trials. Jacobinism thus altered the very institutions of reading and writing by expanding literacy, restructuring the popular arena for reading, and generating a body of diverse texts that were "seditious allegories."

“This is a fine study of a leading democratic politician and important literary figure . . . [which] is in every respect well written.”—Gregory Claeys, University of London

“This is the only current book devoted to British writer Thelwall; most of what has been written about him is available in journal articles, theses, or essays in books about Jacobin politics or Romantic writers. Scrivener (English, Wayne State Univ.; editor, Poetry and Reform: Periodical Verse from the English Democratic Press, 1792-1824) combines literary analysis of Thelwall’s works with historical description of the political and social situation, evaluating Thelwall’s career and his contributions to English literature and politics during the 1790s and early 1800s. Three major areas are covered: the ideological and political philosophy of the Jacobins; Thelwall’s writings and activities as a poet, journalist, scientist, and orator; and his use of allegory as a means to avoid political repression. This specialized but well-done work will complement The Politics of English Jacobinism: The Writings of John Thelwall, edited by Gregory Claeys (Pennsylvania State Univ., 1995). Recommended for all academic libraries, especially those with in-depth collections in Jacobin studies.”—Shana C. Fair, Library Journal

“Michael Scrivener’s Seditious Allegories is one of the handful of book-length studies of radicalism that rise above simple recovery of progressive traditions because of the author’s ability to explain the more complex implications, connotations, and allusions of radical writing and the kinds of audiences that they anticipate. The subtlety of his interpretations of specific texts is welcome, and certainly the richness of his historical awareness is impressive.”—Gary Dyer, European Romantic Review

“The fact that Thelwall was so remarkably interconnected, as writer and as political thinker, makes him a natural figure to be placed within so intricate a texture, and its individual layers are of such inherent value that scholars of many different fields will long have reason to thank Michael Scrivener for having so richly woven it.”—Stuart Curran, Albion

“Scrivener’s lively and informed account will prove quite useful to period scholars, but also worth the notice of readers interested in the genesis of democracy and the thrill of ‘revolution in the air.’ Not only does Seditious Allegories offer cogent analyses of political ideology, it also tells fascinating stories in readable prose.”—Owen Grumbling, Studies in Romanticism