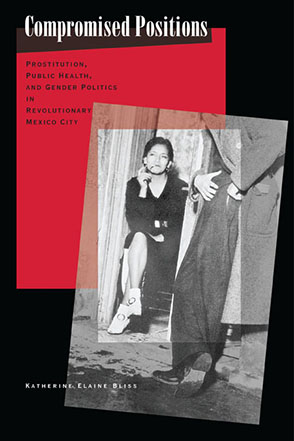 “A nuanced study of how revolutionary politics tried, but ultimately failed, to eradicate prostitution in Mexico City because of its reluctance to promote changes in masculine sexuality and its refusal to include women, particularly prostitutes, in its revolutionary family. This book makes a significant and original contribution to Mexican historiography, one that will challenge the fundamental willingness of revolutionary leaders to take gender issues seriously.”—Donna J. Guy, Ohio State University

To illuminate the complex cultural foundations of state formation in modern Mexico, Compromised Positions explains how and why female prostitution became politicized in the context of revolutionary social reform between 1910 and 1940. Focusing on the public debates over legalized sexual commerce and the spread of sexually transmitted disease in the first half of the twentieth century, Katherine Bliss argues that political change was compromised time and again by reformers' own antiquated ideas about gender and class, by prostitutes' outrage over official attempts to undermine their livelihood, and by clients' unwillingness to forgo visiting brothels despite revolutionary campaigns to promote monogamy, sexual education, and awareness of the health risks associated with sexual promiscuity.

In the Mexican public's imagination, the prostitute symbolized the corruption of the old regime even as her redemption represented the new order's potential to dramatically alter gender relations through social policy. Using medical records, criminal case files, and letters from prostitutes and their patrons to public officials, Compromised Positions reveals how the contradictory revolutionary imperatives of individual freedom and public health clashed in the effort to eradicate prostitution and craft a model of morality suitable for leading Mexico into the modern era.

“A nuanced study of how revolutionary politics tried, but ultimately failed, to eradicate prostitution in Mexico City because of its reluctance to promote changes in masculine sexuality and its refusal to include women, particularly prostitutes, in its revolutionary family. This book makes a significant and original contribution to Mexican historiography, one that will challenge the fundamental willingness of revolutionary leaders to take gender issues seriously.”—Donna J. Guy, Ohio State University

“In this new and important contribution examining the direction of the Mexican revolution, Bliss (history, Univ. of Massachusetts) addresses the complex relationships between the authority assumed by Mexico’s revolution and the political activism of traditionally marginal actors, which influenced the revolution. Carefully researched and well written, her book sides with the historiography suggesting that the Mexican revolution produced new politically active participants who influenced the changes and responsibilities assumed by the revolutionary government. Bliss demonstrates how prostitutes became politicized as the government debated ways to implement social reforms to end prostitution, which served as a reminder of ‘the Porfiriato’s enduring legacy of inequality and corruption.’ But the debate over social reform exposed how the prevailing views about masculinity, social class, and gender, and the relationship of the revolutionary ideals to these issues, exposed the divisiveness governing Mexican social change. Bliss effectively argues that the eradication of prostitution failed because the reformist spirit did not recognize that an intrusive role of the government threatened the economic livelihood of prostitutes, that education projects about sexually transmitted diseases did not address men’s continued willingness to visit prostitutes, and that ultimately, the revolutionary leadership chose not to seriously include women and their issues into the post-revolutionary world. Upper-division undergraduates and above.”—J. B. Kirkwood, CHOICE

“This is an important book not only for Mexicanists but for a wide range of scholars interested in the comparative politics of sex and gender.”—Andrew Wood, American Historical Review

“This book will become a central point of reference for future studies about the history of public health, state-building, and everyday life in modern urban Mexico. Compromised Positions delves into social policies and cultural attitudes toward sex as specific, historical relations between men and women. In doing so, it meaningfully advances our knowledge of the social history of Mexico and Latin America.”—Pablo Piccato, Hispanic American Historical Review

“[This book] addresses an established topic from a fresh perspective, bringing to it new questions, sources and conceptual moorings that illuminate the gendered terrain of revolutionary reform in Mexico.”—Elizabeth Quay Hutchison, Latin American Research Review

“In sum, Compromised Positions is an exhaustively researched, intellectually ambitious, and elegantly written book that will, like its illustrious predecessors, prove richly rewarding to everyone from pomp theoreticians to old-school social historians, from aficionados of the history of prostitution and/or modern Mexico to advanced undergraduates in history and women’s/gender studies classes.”—Robert Buffington, E.I.A.L.

Katherine Elaine Bliss is Associate Professor of History at the University of Massachusetts. She was a David E. Bell Fellow in 2000–2001 at the Center for Population and Development Studies at Harvard University where she currently holds membership.

Regions, Nation, and the State in the Rise of Mexican Industrialism, 1920s–1940s

Gender and Welfare in Mexico

The Consolidation of a Postrevolutionary State