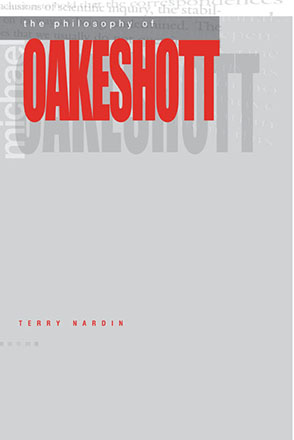 “This book is of very high quality and demonstrates a sophisticated understanding of Oakeshott’s philosophy. It is both interesting and innovative in its interpretations, and presents the ideas with an admirable degree of clarity.”—David Boucher, University of Wales

This is the first comprehensive study of Michael Oakeshott as a philosopher rather than a political theorist, which is how most commentators have regarded him. Indeed, the careful reading of his published and unpublished writings that Terry Nardin provides here shows that Oakeshott's concerns have been primarily philosophical, not political. These writings go far beyond politics to offer a critical philosophy of human activity and of the disciplines that interpret and explain it. Oakeshott argues that inquiry can be independent of practical concerns, even when its subject is the thought and action of human beings.

Although the book considers Oakeshott's views on morality, law, and government, it is primarily concerned with his ideas about the character of knowledge, especially knowledge of intelligent human conduct, and focuses attention on the concepts of modality, contingency, and civility that are central to Oakeshott's philosophy as a whole. Nardin seeks to show how Oakeshott's critique of scientism and other forms of foundationalism supports a powerful version of the argument that history is the proper mode for understanding human choice and action.

The book thus provides the fullest discussion available of Oakeshott's antifoundationalist view of epistemology, metaphysics, and the philosophy of history and the human sciences. It examines his arguments concerning the criteria of truth, the forms of knowledge, the relationship between theory and practice, the place of interpretation in the social sciences, the nature and importance of historical explanation, and the definition of philosophy itself. And it is the first study to look at Oakeshott's relationship to phenomenology, hermeneutics, and other movements in twentieth-century Continental philosophy.

“This book is of very high quality and demonstrates a sophisticated understanding of Oakeshott’s philosophy. It is both interesting and innovative in its interpretations, and presents the ideas with an admirable degree of clarity.”—David Boucher, University of Wales

“The Philosophy of Michael Oakshott is the best overview of its subject so far by a considerable distance, and deserves to become the standard work wherever this unjustly neglected philosopher is studied.”—Luke O’Sullivan, History of Political Thought

“Terry Nardin’s book provides the most extensive consideration of Oakeshott's philosophical endeavours to date. The Philosophy of Michael Oakeshott is a significant contribution to scholarship on Oakeshott’s work. It brings to the forefront an extremely important area of his thought that, for the most part, has not received adequate attention. The setting of Oakeshott’s thought in the context of twentieth-century philosophical reflection upon the character of experience and the world, and the appropriate ways in which to understand the lived world of human conduct also invites the consideration of those with a more general interest in twentieth-century philosophy.”—Glenn Worthington, Review of Politics

“There is not only a refreshing disregard for the well-worn grooves of Oakeshott scholarship but a careful effort at explaining Oakeshott’s arguments on a number of philosophical issues where his views are often caricatured or wrongly assimilated with those of contemporary philosophers. . . . Nardin’s decision to approach Oakeshott as a philosopher and to stress how little of Oakeshott’s work published in his own lifetime was actually concerned with politics . . . serves the reader well.”—Jeremy Rayner, Canadian Journal of Political Science

“'Every man, I suppose, has his political opinions,’ Michael Oakeshott once asserted, ‘but a political philosopher has something more, and more significant, than political opinions: he has an analysis of political activity, a comprehensive view of the nature of political life, and it is this … which is profitable for a later and different age to study’ (Oakeshott, ‘Thomas Hobbes,’ Scrutiny 4 [1935–36]: 265). Terry Nardin seems inspired by Oakeshott to take this attitude a step further, as if to say a political philosopher may have an analysis of political activity, but a philosopher has something more significant, a comprehensive view of human experience, and it is this that is profitable for a later age to study.
[This book] [P]rovides a challenging view to Oakeshott scholars and a thorough, clear starting place for all those interested in his ideas.”—Steven A. Gerencser, Perspectives on Politics

“Nardin’s book can be praised as the comprehensive philosophical account of Oakeshott’s enterprise that it wants to be.”Bijdragen: International Journal in Philosophy and Theology

“Terry Nardin, who teaches at the University of Wisconsin-Milwaukee, has produced an excellent interpretation of the work of Michael Oakeshott.
In the current book, he extends his analysis beyond the focus on politics alone to consider the significance of Oakeshott’s thinking for the social sciences, for the understanding of truth, for analyzing the relation of theory and practice, and indeed for his distinctive view of the nature of philosophy itself.
It is a work that combines praise with scholarly exactitude. It is a philosophic response to a philosophic life.”—Timothy Fuller, Ethics

“Nardin is adept at drawing out and linking the detail of Oakeshott’s writing and has given us a fascinating and penetrating narrative of those parts of his work that he considers both important and insufficiently appreciate.”—James Connelly, Contemporary Political Theory

“The value of this, as Nardin shows us, is that it will give us a more accurate understanding of one of the twentieth century’s most imaginative thinkers. More than this, however, it might also lead us to reflect more critically on the practice of philosophy.”—Chandran Kukathas, Notre Dame Philosophical Reviews

Terry Nardin is Professor of Political Science at the University of Wisconsin-Milwaukee. He is author of Law, Morality, and the Relations of States (1983) and the editor of several other volumes.

A Companion to Michael Oakeshott