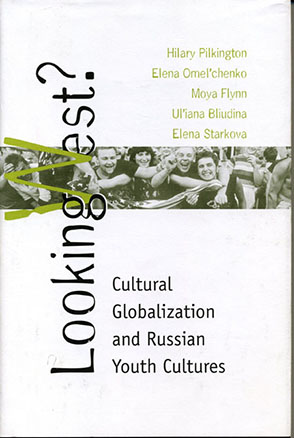 “Looking West? is timely, well conceived, and an excellent amalgam of original sociological research, social and cultural theory, and comparative analysis. Hilary Pilkington and her colleagues have produced a work that will surely become the standard source on the topic for years to come.”—Thomas Cushman, Wellesley College

Russian youth culture has been a subject of great interest to researchers since 1991, but most studies to date have failed to consider the global context. Looking West? engages theories of cultural globalization to chart how post-Soviet Russia’s opening up to the West has been reflected in the cultural practices of its young people.

Visitors to Russia’s cities often interpret the presence of designer clothes shops, Internet cafés, and a vibrant club scene as evidence of the "Westernization" of Russian youth. As Looking West? shows, however, the younger generation has adopted a "pick and mix" strategy with regard to Western cultural commodities that reflects a receptiveness to the global alongside a precious guarding of the local. The authors show us how young people perceive Russia to be positioned in current global flows of cultural exchange, what their sense of Russia’s place in the new global order is, and how they manage to "live with the West" on a daily basis.

Looking West? represents an important landmark in Russian-Western collaborative research. Hilary Pilkington and Elena Omel’chenko have been at the heart of an eight-year collaboration between the University of Birmingham (U.K.) and Ul’ianovsk State University (Russia). This book was written by Pilkington and Omel’chenko with the team of researchers on the project—Moya Flynn, Ul’iana Bliudina, and Elena Starkova.

“Looking West? is timely, well conceived, and an excellent amalgam of original sociological research, social and cultural theory, and comparative analysis. Hilary Pilkington and her colleagues have produced a work that will surely become the standard source on the topic for years to come.”—Thomas Cushman, Wellesley College

“In this excellent book, five authors look at post-Soviet youth culture, and in particular at how Russian youth perceive ‘the West.’ By juxtaposing western products, music, and lifestyles with local youth cultural practices in a discursive and methodological fashion, the researchers manage to paint a vivid picture of Russian youth scenes.”—Cordula Gdaniec, H-Net Book Reviews

“Though these are important omissions, it is hard to ask more from a volume that already does so much. Ultimately, the authors promote a rethinking of how cultural globalization is studied and framed.
But through this dedicated collaborative effort—a model of international co-authorship that itself constitutes an important contribution to the literature—the authors throw into question some of the central premises of globalization talk, including the experiential validity of the term periphery and the assumption that national cultures are in decline.”—Naomi Roslyn Galtz, Social Forces

Hilary Pilkington is Deputy Director of the Centre for Russian and East European Studies at the University of Birmingham.

Moya Flynn is ESRC postdoctoral research fellow at the University of Birmingham.

Ul'iana Bliudina is research associate of the Interdisciplinary Research Centre "Region" and a doctoral student at the Centre for Social Studies, Central European University, Warsaw.

2. On the Outside Looking In? The Place of Youth in Russia’s New Media and Information Space

3. Talking Global? Images of the West in the Youth Media

4. Through Their Own Eyes: Young People’s Images of "the West"

6. The Dark Side of the Moon? Global and Local Horizons

8. Living with the West

In the early 1990s, no nation could claim to be immune from the pressure to liberalize its economy. Everywhere state leaders turned, they were bound to feel this pressure. If they looked outside their countries, they encountered a battery of international scholars, policy advisers, financiers, and investors who demanded market-oriented reforms as a condition for extending their blessing. If they looked to their own regions, they were likely to find a neighboring country already engaged in economic liberalization, and thus, winning a better seat at the negotiating table with international actors. And if state leaders looked to their own countries, they found a growing number of local scholars, elites, technical experts, social movements, and citizens also clamoring for greater economic freedom. Thus, the pressure to liberalize in the early 1990s was ubiquitous.

This is not to say that the political enemies and institutional obstacles to economic liberalization had vanished; in many countries, the defenders of statism remained as entrenched and determined as ever. But the context of their struggle had changed. By the late 1980s, they could no longer claim to be free of rivals.

Few state leaders, therefore, have been able to ignore this three-tiered pressure to liberalize economically. By the late 1980s most state leaders had begun to open or at least seriously considered opening their economies to market forces. This opening, in general terms, consisted of a combination of economic stabilization and structural adjustment reforms. After spending decades intervening in their economies to correct or compensate for market failures, states were now intervening (or thinking of intervening) in their economies to make room for the market. By any standard, this has been the most significant redirection of state policies since the Great Depression.

It is even more remarkable that this “revolution” in state policies has occurred without a corresponding wholesale replacement of state elites. Indeed, the transition to the market in many countries was often launched by the very same political forces that not too long ago were busy demonizing markets and inflating state bureaucracies. The communists of Eastern Europe and Asia, the socialists of Western Europe, and the populists of the developing countries are not identical political forces, but during the postwar period, they shared a historical disdain for markets and a penchant for interventionist economic policies, policies they often justified through a pro-worker, anti-oligarchic rhetoric. And yet it is these very same statist political forces, from China to Italy, from the Kyrgyzstan to New Zealand, that led the transition to the market in the 1990s.

Not all their efforts proved politically viable. While some nations have managed to take market transitions very far, others have experienced setbacks, ranging from mere paralysis to outright societal upheaval. Likewise, while some statist parties have succeeded in transforming themselves into effective deliverers of market forces, other statist parties have failed. The transition to the market, whether carried out by old-time believers or new converts, has produced cases of both accomplishments as well as setbacks.

Recall the differences in performance of Mikhail Gorbachev in the Soviet Union and Deng Xiaoping in China. Both leaders came from quintessentially statist political parties. In the 1980s both leaders decided to reduce the role of the state in the economy and embrace market reforms. Deng Xiaoping carried through without jeopardizing his political regime. Mikhail Gorbachev, on the other hand, provoked a political backlash that brought his down.

On a somewhat more modest scale, in Argentina and Venezuela, two quintessentially statist political parties—Acción Democrática (AD) in Venezuela and the Partido Justicialista (the PJ, or Peronist Party) in Argentina—decided to embark on a transition to the market in 1989. As in China and Russia, the transition entailed a complete abandonment of a model of economic development that had been in place since at least the 1940s, inflicting heavy costs on key constituents of these parties. Five years later, the outcomes could not have been more different. In Argentina, the reforms were accepted and extended, most political forces accepted the new economic regime, and the reformers were reelected in 1995. In Venezuela, however, the reforms were rejected, the reformers were thrown out of office in 1993, and the country plunged into an economic and political crisis that lasted throughout the 1990s.

Argentina and Venezuela are part of a wider constellation of market-oriented reforms by statist political forces that culminated in either implementation or interruption. Statist, labor-based parties managed to implement reform without provoking major political unrest in Australia, Bolivia, Colombia, Costa Rica, Chile, France, Hungary, Jamaica, New Zealand, Poland, Spain, and Vietnam in the 1980s and 1990s. In many other cases, similar efforts failed. In Brazil, for example, between 1985 and 1994, presidents from statist-populist political forces (José Sarney, Fernando Collor de Mello, and Itamar Franco until 1994) continuously failed to tame hyperinflation, let alone undertake deep structural reforms. In Peru, Zambia, Greece, and the Dominican Republic in the 1980s, statist political forces tried to introduce market reforms, but quickly gave up. In India, prime minister P.V. Narasimha Rao from the statist-populist Indian National Congress announced an ambitious market reform program in 1991. Five years later, the reforms had made only negligible progress, and the highly fractured ruling party suffered a resounding defeat at the polls. In Colombia, the very same ex-statist party that had carried out deep economic reforms in the early 1990s (the Liberal Party under César Gaviria) had serious difficulties sustaining the reform process under the subsequent administration (Ernesto Samper). And in Paraguay, Ecuador, Haiti, Uruguay, and Jamaica the economic reforms presented by statist parties either went nowhere or proceeded very slowly.

Thus, some leaders from statist-populist forces have gone far in implementing antistatist reforms, while others have stumbled. One is the “populists-make-bad-reformers” argument that statist forces cannot be expected to deliver market reforms because they lack the conviction, autonomy, and commitment to push for sound reforms. The second view is the “Nixon-in-China” argument that it is precisely the statist forces that have the best chance at reforming because market reforms (like the process of embracing an enemy nation such as China) is a risky affair, and thus, the most mistrusting political force is more likely to undertake this process effectively (see Cukierman and Tommasi 1998 and Rodrik 1994 and 1996).

In short, it is not clear why some former statist political forces attempting to implement antistatist policies succeed, like the PJ in Argentina, and why some, like the AD in Venezuela, fail. Under certain conditions, statist-populist reformers are capable of delivering far-reaching market reforms; under other conditions, they are not. By focusing on two dichotomous cases in detail, Argentina and Venezuela in the 1990s, and several other cases in more general terms, this study seeks to discover what these conditions are.