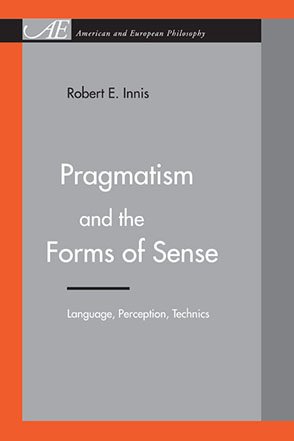 “This is a work of first-rate scholarship and deep-cutting philosophy, replete with important insights and fruitful suggestions. The author brings into sharp focus, above all else, language and what he calls (following Ernst Cassirer) technics by drawing upon diverse traditions—principally the pragmatism of Peirce and Dewey, the phenomenology of Husserl, Heidegger, and Merleau-Ponty, the work of Cassirer and Langer in the philosophy of symbolism, and that of Bühler and others in linguistics. He shows how these and related phenomena (for example, perception, action, agency, and consciousness) are at once fully embodied and irreducibly symbolic. His explorations of linguistic and other forms of sense ought to be of interest to a wide audience.”—Vincent Colapietro, Penn State University

Making sense of the world around us is a process involving both semiotic and material mediation—the use of signs and sign systems (preeminently language) and various kinds of tools (technics). As we use them, we experience them subjectively as extensions of our bodily selves and objectively as instruments for accessing the world with which we interact. Emphasizing this bipolar nature of language and technics, understood as intertwined "forms of sense," Robert Innis studies the multiple ways in which they are rooted in and transform human perceptual structures in both their individual and social dimensions.

The book foregrounds and is organized around the notion of "semiotic embodiment." Language and technics are viewed as "probes" upon which we rely, in which we are embodied, and that themselves embody and structure our primary modes of encountering the world. While making an important substantive contribution to present debates about the "biasing" of perception by language and technics, Innis also seeks to provide a methodological model of how complementary analytical resources from American pragmatist and various European traditions can be deployed fruitfully in the pursuit of new insights into the phenomenon of meaning-making.

“This is a work of first-rate scholarship and deep-cutting philosophy, replete with important insights and fruitful suggestions. The author brings into sharp focus, above all else, language and what he calls (following Ernst Cassirer) technics by drawing upon diverse traditions—principally the pragmatism of Peirce and Dewey, the phenomenology of Husserl, Heidegger, and Merleau-Ponty, the work of Cassirer and Langer in the philosophy of symbolism, and that of Bühler and others in linguistics. He shows how these and related phenomena (for example, perception, action, agency, and consciousness) are at once fully embodied and irreducibly symbolic. His explorations of linguistic and other forms of sense ought to be of interest to a wide audience.”—Vincent Colapietro, Penn State University

Robert E. Innis is Professor of Philosophy at the University of Massachusetts at Lowell.

Introduction: Pragmatism and the Forms of Sense

1. Perceptual Consciousness and the Structures of Meaning: Peirce and Polanyi

2. From Indication to Predication: Situating Language with Bühler, Gardiner, and Wegener

3. Pragmatism and the Analysis of Meaning: Lessons from Giovanni Vailati

Part 2: The Senses of Technics

4. Technics and the Bias of Perception: Polanyi and the Forms of Embodied Meaning

5. Pragmatist Aesthetics and the Critique of Technology

6. Form and Technics: Scope and Nature of Cassirer’s Semiotic Analysis of Technology

Anyone who has ever used a ‘probe’ or ‘instrument’ of any sort—knitting needle, hammer, dentist’s drill, paint brush, fountain pen, bifocals, microscope, bicycle, violin, algebraic formula, musical notation system, written script, and so forth—has experienced the strange shift of feeling that occurs when we realize that we have ‘fused’ in some ways with the probe. On the one hand, it has seemingly become part of our body or our perceptual system, our field of consciousness, as a whole. It appears, like the language we use or the bicycle we are riding, to have become ‘transparent.’ On the other hand, it clearly has opened a new ‘access structure’ to the world. It has extended us toward it in a new way, given us a new power of being, knowing, and acting.

Michael Polanyi, the philosopher-scientist and author of the masterwork, Personal Knowledge, examined in many formats under the rubric of ‘tacit integrations’ and of ‘indwelling’ this felt shift and its epistemological and practical implications. He reconstituted, with different means, what had become a commonplace topic—the problem of embodiment—in the tradition of phenomenological analysis stemming from Heidegger and extended by Merleau-Ponty (and later by Don Ihde and a host of others). In Polanyi’s formulation, taking off from some fertile clues from Gestalt psychology’s thematization of the figure/ground and parts/whole relationships, we subsidiarily ‘attend from’ probes, understood in the most general sense as ‘vectors,’ while we, by an integrative act, focally ‘attend to’ whatever they allow us to directly ‘grasp,’ whether perceptually, affectively, motorically, theoretically, aesthetically, religiously. This from-to structure, Polanyi claimed, is a universal feature of consciousness, and the essentially integrative process of meaning-making with which it is identified, in all its forms:

[A]ll thought contains components of which we are subsidiarily aware in the focal content of our thinking, and ... all thought dwells in its subsidiaries, as if they were parts of our body. Hence thinking is not only necessarily intentional, as Brentano has taught: it is also necessarily fraught with the roots that it embodies. It has a from-to structure. (Polanyi 1966, x)

In a central chapter of his Experience and Nature John Dewey argued that the systematic use of language and tools is the mark of human mentality (1925, 133). On Polanyian terms, they would be the ultimate embodied roots with which human thinking is fraught. A tool, according to Dewey, is intrinsically relational, anticipatory, predictive, subsidiary. Indeed, in a comment reminiscent of Heidegger, Dewey claimed that "without reference to the absent, or ‘transcendence,’ nothing is a tool." As for language, Dewey asserted in a remarkable formulation that being "the tool of tools" it is, in the deepest sense, "the cherishing mother of all significance" (146). Both tools and language make, in multiple ways, the absent present. We attend from them for attending to something. This position on language and tools Dewey was able to sustain without the slightest temptation to a universalistic logocentrism, which would reduce all significance or meaning to the dimension of language, or to some exuberant glorification of the ‘technical’ or ‘instrumental.’ Indeed, for Dewey (and also for Whitehead) the ground floor, so to speak, of all our meaningful encounters with the world, prior to and embodied in our use of language and tools quite generally, is a qualitative matrix, a field of ‘tones’ and ‘affects’ that ‘color’ every activity and every object. Dewey’s essentially ‘pragmatic’ position is matched by Ernst Cassirer’s key ‘semiotic’ insight into the nature of ‘tools’ quite generally: they exemplify the universal spiritual power and need for ‘mediation’ for human dealing with the world. Semiotic mediation, through signs and sign systems, with language standing indispensably in the middle, and material mediation, through tools, machines, processes, go together. Cassirer affirmed, in a remarkable parallel to Dewey’s way of putting the matter, that "all spiritual mastery of reality is bound to this double act of ‘grasping’ (Fassen): the conceptual grasp (Begreifen) of reality in linguistic-theoretical thought (Denken) and its material grasp (Erfassen) through the medium of effective action (Wirken); to, that is, the conceptual as well as the technical process of giving-form to something (Formgebung)" (Cassirer 1930, 52).

Taking their lead from these claims the chapters of this book focus on the ‘probal’ nature of language and technics as embodied in, and as embodied forms of, perception. They study the nature, scope, and implications of this phenomenon from a variety of points of view. They utilize and validate the heuristic fertility and conceptual power of a novel mix of analytical frameworks. These are taken, primarily but not exclusively, from ‘American’ and ‘European’ philosophical traditions that are rarely in conversation with one another. They exploit for our specific purposes, and bring into relation, the work of thinkers who stand rather outside the list of ‘usual suspects’ who come to mind when ‘European’ philosophy is brought into dialogue with a putatively distinctively ‘American’ way of philosophizing about issues of common concern. In this case it is the reciprocating roles of language, technics, and perception in shaping and forming the various individual and social ‘matrices of meaning’ in which human beings make sense of themselves and their worlds. Language and technics are treated in this book as twin ‘forms of sense,’ that is, vast web-like systems of meaning-making in which we dwell, into which we have extended ourselves, and upon which we must fatefully rely. They are also ‘forms of sense’ in that they shape, form, and mold the very channels in which our body-based perceptual systems grow and develop. Language and technics share the property of themselves not just shaping, but also growing out of their perceptual, actional, and social roots. Neither language nor technics, consequently, are autonomous systems. Their have their ‘roots’ in the skill-equipped body of an incarnate human being, with which they become inextricably intertwined. The various chapters of this book attempt, by means of what Justus Buchler called a method of ‘rotation,’ to throw new light quite generally on how the forms of meaning-making consciousness define, as well as are defined by, a variety of linguistic and technological embodiments.

Readers accustomed to pigeon-holing positions and philosophical schools and traditions will quickly notice some rather unfamiliar faces and voices around the table. They may want to know why these interlopers, if such they be, have been allowed to crash the intellectual party. C.S. Peirce, John Dewey, G. H. Mead, and A. N. Whitehead, who figure in varying degrees prominently in the following discussions, are easily enough ‘placed,’ even if not uniformly appreciated in the ways I am going to try to show. But what about the rest of the cast of characters who take part in this philosophical play? The dialogue, I think, can be edifying for all.