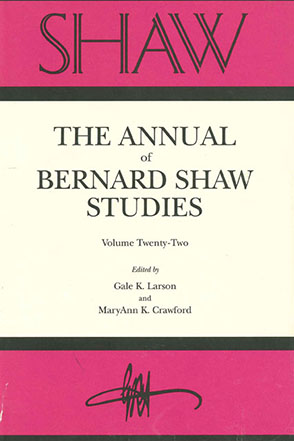 Gale K. Larson is Professor of English at California State University, Northridge.Shaw, now in its twenty-second year, publishes general articles on Shaw and his milieu, reviews, notes, and the authoritative Continuing Checklist of Shaviana, the bibliography of Shaw studies.

From Murray's Mother-in-Law to Major Barbara:

1. The Outside Story, Sidney P. Albert

5. Bernard Shaw's Theory of Political Theater: Difficulties from the Vantages of Postmodern and Modern Types of the Self, Charles Grimes Candida:

7. Anxieties and Influences: The Presence of Shaw in Kushner's Angels in America, Verna A. Foster

Index of Shaw: The Annual of Bernard Shaw Studies from Volumes One to Twenty-One, Gale K. Larson, Compiler