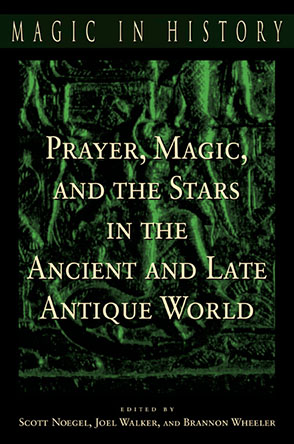 “This book is as professionally and indeed attractively produced as are the other volumes in the worthy Pennsylvania State Magic in History series.”—Daniel Ogden, International Journal of the Classical Tradition

In the religious systems of ancient Mesopotamia, Egypt, and the Mediterranean, gods and demigods were neither abstract nor distant, but communicated with mankind through signs and active intervention. Men and women were thus eager to interpret, appeal to, and even control the gods and their agents. In Prayer, Magic, and the Stars in the Ancient and Late Antique World, a distinguished array of scholars explores the many ways in which people in the ancient world sought to gain access to—or, in some cases, to bind or escape from—the divine powers of heaven and earth.

Grounded in a variety of disciplines, including Assyriology, Classics, and early Islamic history, the fifteen essays in this volume cover a broad geographic area: Greece, Egypt, Syria-Palestine, Mesopotamia, and Persia. Topics include celestial divination in early Mesopotamia, the civic festivals of classical Athens, and Christian magical papyri from Coptic Egypt. Moving forward to Late Antiquity, we see how Judaism, Christianity, and Islam each incorporated many aspects of ancient Near Eastern and Graeco-Roman religion into their own prayers, rituals, and conceptions. Even if they no longer conceived of the sun, moon, and the stars as eternal or divine, Christians, Jews, and Muslims often continued to study the movements of the heavens as a map on which divine power could be read.

Published as part of Penn State's Magic in History series, Prayer, Magic, and the Stars appears at a time of renewed interest in divination and occult practices in the ancient world. It will interest a wide audience in the field of comparative religion as well as students of the ancient world and late antiquity.

“This book is as professionally and indeed attractively produced as are the other volumes in the worthy Pennsylvania State Magic in History series.”—Daniel Ogden, International Journal of the Classical Tradition

1. Here, There, and Anywhere

2. Thessalos of Tralles and Cultural Exchange

3. The Prayer of Mary in the Magical Book of Mary and the Angels

4. Hebrew, Hebrew Everywhere? Notes on the Interpretation of Voces Magicae

6. The Open Portal: Dreams and Divine Power in Pharaonic Egypt

7. Viscera and the Divine: Dreams as a Divinatory Bridge Between the Corporeal and the Incorporeal

8. Stars and the Egyptian Priesthood in the Graeco-Roman Period

9. Divination and Its Discontents: Finding and Questioning Meaning in Ancient and Medieval Judaism

Part IV The Sun, the Moon, and the Stars

11. Astral Religion and the Representation of Divinity: The Cases of Ugarit and Judah

12. A New Star on the Horizon: Astral Christologies and Stellar Debates in Early Christian Discourse