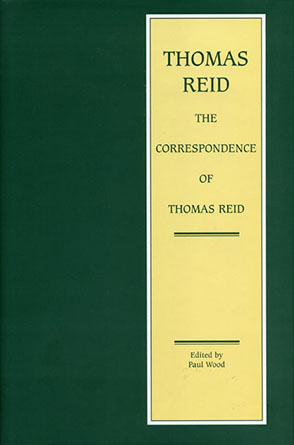 “Wood is to be congratulated for providing an exemplary edition of a major thinker’s correspondence.”—Benjamin W. Redekop, Canadian Journal of History

Thomas Reid (1710–1796) is now recognized as one of the towering figures of the Enlightenment. Best known for his published writings on epistemology and moral theory, he was also an accomplished mathematician and natural philosopher, as an earlier volume of his manuscripts edited by Paul Wood for the Edinburgh Reid Edition, Thomas Reid on the Animate Creation, has shown.

The Correspondence of Thomas Reid collects all of the known letters to and from Reid in a fully annotated form. Letters already published by Sir William Hamilton and others have been reedited, and roughly half of the letters included appear in print for the first time.

Writing in 1802, Reid's disciple and biographer Dugald Stewart doubted that Reid's correspondence "would be generally interesting." This collection proves otherwise, for the letters illuminate virtually every aspect of Reid's life and career and, in some instances, provide us with invaluable evidence about activities otherwise undocumented in his manuscripts or published works.

Through his correspondence we can trace Reid's relations with contemporaries such as David Hume and his colleagues at both King's College, Aberdeen, and the University of Glasgow, as well as his engagement with the most controversial philosophical, scientific, and political issues of his day. If anything, the letters assembled here serve as the starting point for understanding Reid and his place in the Enlightenment.

“Wood is to be congratulated for providing an exemplary edition of a major thinker’s correspondence.”—Benjamin W. Redekop, Canadian Journal of History

“Here is a volume at once various, provocative, intimate, delightful, more than occasionally moving.”—Daniel N. Robinson, Review of Metaphysics

“These are the letters of a good man and a good writer. Specialists and general readers alike will find much to reward their interest in this well-produced volume.”—John D. Baird, University of Toronto Quarterly

Paul Wood has written widely on Thomas Reid and on science and philosophy in the Scottish Enlightenment. He is Associate Professor of History and Director of the Humanities Centre at the University of Victoria, Canada.

Thomas Reid on the Animate Creation

Papers Relating to the Life Sciences