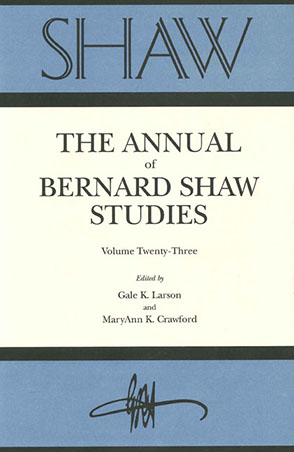 2. BACK TO METHUSELAH: A "GRAND PRECURSER" [SIC] TO FINNEGANS WAKE

3. HOSTAGES OF HEARTBREAK: THE WOMEN IN HEARTBREAK HOUSE

7. IS THE HOLY GHOST A SCIENTIFIC FACT? WHY SHAW’S CREATIVE EVOLUTION MIGHT BECOME THE SCIENTIFIC RELIGION OF THE TWENTY-FIRST CENTURY

8. ALL ABOUT EVE: TESTING THE MILTONIC FORMULA

10. "THE GULF OF DISLIKE": TRUTH AND THE POSTMODERN CONDITION IN SHAW’S "THE BLACK GIRL IN SEARCH OF GOD"

11. OUTWITTING DESTINY: THE ARTIST AS SUPERMAN

12. THE PLAYWRIGHT AND THE PRIZEFIGHTER: THE REMARKABLE RELATIONSHIP BETWEEN BERNARD SHAW AND GENE TUNNEY

14. G.B.S. IN HELLAS: A RESOURCE FOR CLASSICISTS

A CONTINUING CHECKLIST OF SHAVIANA

Milwaukee, Wisconsin, 19–21 April 2001, was sponsored by the Wisconsin

Humanities Council and the National Endowment for the Humanities.

the people of Wisconsin in the exploration of human cultures, ideas, and

values. It is funded in part by the NEH, by the State of Wisconsin, and by

other sources both public and private. Additional support was provided by

Technical College, John Ogden, the Department of Performing Arts, the

Department of English, organized the program that follows. I have modi-

fied it so that it reflects general interest for readers of SHAW, deleting, for

type and appear in their chronological order of presentation.

Opening Remarks from Michael Gillespie, organizer of the Conference Plenary

Address from Ray Bradbury, "Predicting the Past, Remembering the

[In a well-received plenary address, Ray Bradbury acknowledged his

indebtedness to Bernard Shaw, John Huston, and others. He thrilled the

lives with its "affluence of despair."]

Martha Black (chair) "Back to Methuselah: A ‘Grand Precurser’ [sic]

Valerie Murrenus "Hostages of Heartbreak: The Women of

Elizabeth Gaines "Staging Back to Methuselah"

Shaw to the Left and the Right

Science and the Further"

Stuart Baker "Is the Holy Ghost a Scientific Fact? Why

the Scientific Religion of the Twenty-first

Under the Direction of Montgomery Davis, In the Beginning and The Gospel

Shaw’s Status on Academe, Theater, and Elsewhere: A Discussion [Gale

Conference participants were offered a box lunch and a performance/

Plenary Address from Rhoda Nathan, "All About Eve: Testing the Miltonic

Shaw and the Prisonhouse of Language

Maureen Hawkins "Do Something! The Sense of No Ending in

of Back to Methuselah" [Conolly’s book on

Shaw and Barry Jackson is now in

publication. He has substituted his initial

paper with "GBS and the BBS: In the Beginning

Shaw and the Modern Condition

Frank C. Manista (chair) "‘The Gulf of Dislike’: Truth and the

Postmodern Condition in Shaw’s ‘The Black

Girl in Search of God’"

Nicole Freim "Cult of the Capitalist: Undershaft as

Under the Direction of Montgomery Davis, The Thing Happens, from Back to

Methuselah, was performed at the Chamber Theatre the evening of 20 April.

Plenary Address from Sally Peters, "Outwitting Destiny: The Artist as

Shaw at the Podium

Jay Tunney (chair) "The Playwright and the Prizefighter: The

The Hedgerow Theatre Repertory, and

Sidney Albert "G.B.S. in Hellas: A Resource for Classicists"

A. K. Bhatt "Shaw and the Mystic Vision"

the Works: The Fraternal Twinship of

Norma Jenckes "The Education of Desire in Shaw’s

Pygmalion and Guare’s Six Degrees of

Martha Black "Blather and Betrayal in John Bull’s Other

Mary Maxine Browne "Candida: The Shining White Lady or the

Conference attendees gathered in the late afternoon and formed a Committee

of an International Shaw Society. Sidney Albert had suggested the idea at

an earlier session. The resolution to support such a measure was passed

On the evening of 21 April, conference members were treated to a performance

of Marquette University. A closing reception followed the performance

with a participatory discussion with cast members led by Michael

of the Milwaukee Chamber Theatre.

Under the title "Conference in Milwaukee," T. F. Evans, editor of The Shavian,

the official journal of the Shaw Society of London, presented his

views of the conference. The article was first published in the Summer

should be, your Editor heard, rather late in the day, of a Shaw conference

to be held at Marquette University in Milwaukee in the

distant state of Wisconsin. Bastable and gracious spouse were

accordingly dispatched thither. As there was the likelihood of

meeting old friends and colleagues in the world of Shaw interest

and studies, it was thought a good thing to go. Although it was

already the second half of April, the month maintained its Eliotian

reputation for cruelty and it was really bitter. It would not have

our arrival in Chicago. However, there was a slight but very

pleasant rise in the temperature in Milwaukee and the welcome

given by fellow Shavians could not have been warmer. As to the

business of the conference, it was nothing if not concentrated. The

period each day with the same number in the afternoon.

The arrangements had the advantage of variety, but there was the

qualification that some speakers, and there was a very welcome

crop of new names, found it difficult to compress their remarks

within the confines of a strictly limited timetable. The resultant

speed of reading from manuscripts was not always conducive to

total absorption by the audience, however eager.

There was nevertheless much of great value to enjoy and

remember. The opening speaker giving a keynote address was Ray

Bradbury, known to the more ignorant among us as a writer of science

fiction only, but he revealed himself as a most attractive speaker

with a wide and all-embracing literary knowledge and taste and,

very relevant to the occasion, a most experienced and enthusiastic

Shavian as well. This certainly set things off on the right lines. Wellknown

speakers in Shavian circles, such a Dan H. Laurence, Rhoda

contributed and will doubtless establish themselves in the world of

Shaw studies in due course. It was disappointing that, in consequence

of the late enrollment, the conference members did not have

the opportunity to be charmed by the Bastable voice, but perhaps

voice. In fact, there were no speakers from outside North America.

One other disappointment was that too few of the contributors,

some of them the experienced as well as beginners, failed to

public speakers. It might have been too much to expect newcomers

to catch any of the true Shavian spirit, but perhaps some of the sen-

iors might have given an example in this respect. As it was, the prevailing

tone was perhaps one of earnestness or even solemnity.

That quibble apart, there was much to remember. A specially

noteworthy speaker was Jay Tunney, son of the eminent Gene,

whose friendship with Shaw has been well recorded in other places,

such as the book by our own Benny Green, Shaw’s Champions. The

great world champion was well known for his most unpugilistic

most memorable features of the entire conference. There was also

the fact that, for many of us, it was the occasion of our first visit to

the celebrated Chamber Theatre, world-renowned for its Shaw

productions under the artistic director, Montgomery Davis. We saw

the full version of Back to Methuselah presented in three sections,

two in the Chamber Theatre itself and the final one, comprising

the last two plays of the five, in a theater of the university, played

by a cast of students. There was a "talk back" and a final reception,

share views on the entire proceedings, and the performance of the

play. It all amounted to a grueling experience, but a most rewarding

Another Shaw Conference is in the planning stages, and it is hoped that

sufficient lead time will be communicated to our Shavian friends from

beyond North America so that their participation will be assured, especially

from the witty and lighthearted voice of Bastable, T. F. Evans. Dick

Dietrich, editor of the University of Florida Bernard Shaw Series, and

Lagretta Tallent Lenker, author of Fathers and Daughters in Shakespeare and

Shaw, announced at a meeting of a Shaw group at the Shaw Festival in Niagara-

on-the-Lake, 24 August 2002, of their intention of organizing such a

conference in the near future. A summary of the Shaw group meeting at

to dietrich@chumal.cas.usf.edu. More specific information about the forthcoming

Shaw Conference at the University of South Florida is provided in

the "Notices" section in this volume and on the conference Web site: