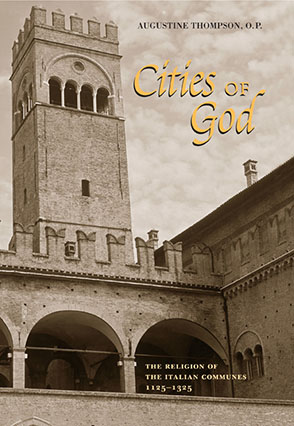 “Using a wealth of evidence drawn from civic and ecclesiastical statues, tithe lists, saints’ lives, art, and architecture, Thompson reminds us that the urban environment was densely packed with expressions of orthodox religion. . . . This book is a stunning achievement. Not only is it a masterful study of the Italian church and lay religion, it calls into question prevailing views of communal society and challenges us to rethink the way we apply terms like ‘secular’ and ‘religious’ to medieval society.”—David Foote, American Historical Review

We know much about the Italian city states—the “communes”—of the twelfth and thirteenth centuries. But historians have focused on their political accomplishments to the exclusion of their religious life, going so far as to call them “purely secular contrivances.” When religion is considered, the subjects are usually saints, heretics, theologians, and religious leaders, thereby ignoring the vast majority of those who lived in the communes. In Cities of God, Augustine Thompson gives a voice to the forgotten majority—orthodox lay people and those who ministered to them.

Thompson positions the Italian republics in sacred space and time. He maps their religious geography as it was expressed through political and voluntary associations, ecclesiastical and civil structures, common ritual life, lay saints, and miracle-working shrines. He takes the reader through the rituals and celebrations of the communal year, the people’s corporate and private experience of God, and the “liturgy” of death and remembrance. In the process he challenges a host of stereotypes about “orthodox” medieval religion, the Italian city-states, and the role of new religious movements in the world of Francis of Assisi, Thomas Aquinas, and Dante.

Cities of God is bold, revisionist history in the tradition of Eamon Duffy’s Stripping of the Altars. Drawing on a wide repertoire of ecclesiastical and secular sources, from city statutes and chronicles to saints’ lives and architecture, Thompson recaptures the religious origins and texture of the Italian republics and allows their inhabitants a spiritual voice that we have never heard before.

“Using a wealth of evidence drawn from civic and ecclesiastical statues, tithe lists, saints’ lives, art, and architecture, Thompson reminds us that the urban environment was densely packed with expressions of orthodox religion. . . . This book is a stunning achievement. Not only is it a masterful study of the Italian church and lay religion, it calls into question prevailing views of communal society and challenges us to rethink the way we apply terms like ‘secular’ and ‘religious’ to medieval society.”—David Foote, American Historical Review

“This brilliant, innovative, challenging, and often surprising book lays out every conceivable aspect of the religious lives of citizens of the medieval Italian commune. It is also a fascinating exposition of the unexpected ways in which civic communes of central and northern Italy from the late twelfth to the early fourteenth century were indeed Cities of God.”—William Bowsky, History: Reviews of New Books

“Augustine Thompson’s immensely scholarly work has enormous implications for our understanding of the western political legacy. He has successfully shown that the most democratic, the most participatory strand in the Italian civic republican legacy was a specifically Catholic one that was not at all neopagan nor secular in the modern sense. This demonstration should further disturb our lingering tendency to narrate the story of the last one thousand years as one in which forces of ‘progress’ gradually banish the gothic shadows.”—John Milbank, Research Professor of Religion, Politics and Ethics, University of Nottingham

“Augustine Thompson’s Cities of God provides a valuable overview of the religious lives of ordinary lay people in the towns of northern Italy during the central Middle Ages.”—Maureen C. Miller, Ecclesiastical History

Augustine Thompson, O.P. is Professor of Religious Studies and History at the University of Virginia. He is the author of Revival Preachers and Politics in Thirteenth-Century Italy (1992) and, with James Gordley, Gratian: The Treatise on Laws with the Ordinary Gloss (1993).

2. From Conversion to Community

Epilogue: Communal Piety and the Mendicants

This is a book about the religious life of ordinary laypeople in high medieval Italy. As such, it is an excursion into a mostly uncharted world, the lived experience of orthodox religion in the Italian cities. Some readers might find this characterization surprising, even shocking. Nothing could be better known than what it meant to be “Catholic” Christians in the Italy of Saint Francis and Dante. So historians of medieval religion have directed their gaze and research elsewhere. During my first venture into the world of thirteenth-century Italian religion, more than fifteen years ago, I was surprised to discover how little the day-to-day orthodox world had been studied. Older scholarship produced studies of papal politics and scholastic theology, but these treated only an ecclesiastical elite. In his classic study of medieval religious movements, Herbert Grundmann first suggested that high medieval heresy, the mendicants, and women’s mysticism all formed part of a single whole and deserved more attention. Subsequent scholarship focused, almost exclusively, on those three phenomena. A glance at the treatment of medieval religion in the Einaudi handbook of Italian history, itself the work of an eminent scholar, shows an odd religious landscape. Traditional scholarly divisions rule: a section on the Gregorian Reform is followed by sections dedicated to heresy and repression (pp. 609–733), the mendicant orders (pp. 734–874), and the Church’s institutional crises of the 1300s (pp. 874–974). Heretics, popes, theologians, Franciscans, and saints. Where is everyone else?

Among Grundmann’s areas of interest, heretics were the first to generate a scholarly industry, already vital in the 1960s. The bibliography on heresy in medieval Italy is vast and ever expanding. There is also a growing recognition that heresy cannot be understood apart from the religion it rejected. In spite of their prominence in modern scholarship, heretics represented only a tiny fraction of the medieval Italian population. Since 1980 Grundmann’s interest in thirteenth-century mysticism has been transformed, in great part by the work of André Vauchez, into a rich and expanded field of study, that of saints and holiness. But again, as in the case of heretics, saints represented only a tiny fraction, albeit an important one, of those living in the medieval Italian cities. New studies on “popular religion” and “lay piety” initially appeared to be very promising. But the religious experience studied in these books tends to dissolve into a disembodied piety; day-to-day realities are lost in generalizations and abstraction. This book is a study of neither the “popular religion” nor the “lay piety” showcased in such books. It is, I hope, something greater, a recovery of the religious world of all in the Italian cities who considered themselves orthodox Christians. Medieval lay piety is incomprehensible without the sacraments and the clergy, but “popular religion” is seldom treated as part of the larger world of orthodox worship and belief. Perhaps its very “legality” and ordinariness make the garden variety of Christian life so elusive. The scarcity of sources and the opacity of those that exist cannot excuse the failure to pursue such a study, although they are often so used. Indeed, Vauchez has already pointed the way toward recovering the concrete, lived religion in Italy in spite of the lack of sources.

The communes were simultaneously religious and political entities. This may sound like a commonplace, but given the trajectories of modern scholarship, this perspective represents something of a reorientation. Historians of communal Italy once focused on the cities as a precursor for the centralized states of early modern Europe, and this political perspective still obscures the religious nature of communal Italy for many modern observers. Recently, historians of medieval Italy have gone beyond a story of political progress and emphasized instead the factiousness, primitiveness, oligarchy, particularism, and agrarian dependence of the cities, their “archaic” nature. All to the good. Yet in histories of the communes, religion remains oddly alien to the civic life. In Philip Jones’s recent 673-page study of the Italian city-states, the author dedicates a mere seventeen pages to their religious life—and these are mostly dedicated to conflicts over ecclesiastical and secular jurisdiction. The best short overview of the communes available in English asserts: “The Italian communes . . . were essentially secular contrivances whose particularism flourished in spite of a universal religion and the claims of a universal empire.” No, I do not think so. What this opposition of clerical and lay realms obscures is that the city was a single entity, however jurisdiction and government were divided. And its lay government, far from being “secularized” by its separation from the cathedral and bishop, came to express and understand itself through ever more explicitly religious rhetoric and rituals. The communes were able to distance themselves from the medieval empire because they, like the empire, claimed a sacred legitimacy. It has been argued that the proximity of the papacy and wars with the popes forced the communes to develop this religious identity—to justify political policies independent of the papacy. But this flies in the face of the political policies and communal identity of the first Lombard League. Rather, it was the cities’ wars with the empire that encouraged their citizens to sacralize the commune. The cities exploited religious forms of organization, they sought legitimacy through the cult of patron saints, they conceptualized their time and space in sacred terms, and these religious realities in turn formed the people. The Italian city as a living religious entity deserves greater attention.

I should note from the onset that I have chosen to keep the Franciscans on the sidelines and so let the piety that produced Francis speak for itself. There is probably no period and place in Christian history where ordinary people had a greater impact on forms of devotion than in the communal republics of Italy. The world of the communes came between the rule of the count-bishops of the old empire and the later rule of the princes. The cities produced a religious culture truly their own. Communal Italy also produced the single largest concentration of lay saints in Christian history, the modern age included. This book is meant to be about the people who produced Saint Francis, not his imitators or those whom he influenced.

Scholars of ancient and early modern religion have already produced fine reconstructions of Christians and their lived piety—their rituals, their beliefs, and their devotions. These accomplishments challenge the way we Italian medievalists do our work. Such a study is long overdue for communal Italy. If my book has succeeded in recapturing this lost world, even in part, then good. If it has failed, then I hope it will convince others to renew the attempt.