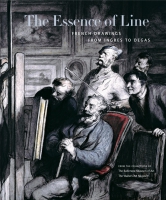 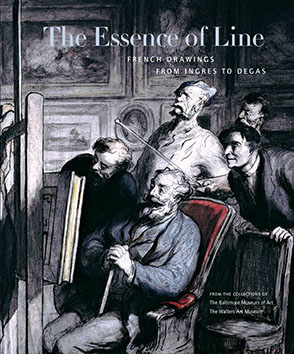 “Very full and solid, this work will be a valuable contribution to nineteenth-century studies and an essential reference for art libraries.”—Colta Ives, Curator, The Metropolitan Museum of Art

Many patrons of the arts in nineteenth-century America built collections of paintings and sculpture imported primarily from England or Italy. Collectors in Baltimore—William Walters, George Lucas, the famous Cone sisters, among others—stand out in this milieu for having developed a strikingly different aesthetic for their homes and newly founded public institutions. These collectors looked to France for models of culture and, acting upon a remarkable understanding of the educational needs and working methods of artists, assembled extensive collections of drawings by French masters, from David to Daumier, Degas, and Cézanne.

The Essence of Line offers the first comprehensive discussion of the formation of these collections and their significance for the history of French art. The book begins with essays by Jay M. Fisher, William R. Johnston, and Cheryl K. Snay that trace the history of collecting in Baltimore and afford new insights into the acquisition, display, and interpretation of drawings. In her essay, conservator Kimberly Schenck bridges the worlds of the collector and of the artist by examining the production and the use of drawing materials in an epoch of radical changes as much in technique as style. This book also provides a fully illustrated, scholarly catalogue for one hundred of the most important of the nineteenth-century French drawings now held by The Baltimore Museum of Art, The Walters Art Museum, and the Peabody Art Collection.

Published on the occasion of an exhibition jointly organized by The Baltimore Museum of Art and The Walters Art Museum, this book presents a brilliant panorama of sketches, watercolors, and presentation drawings, many of them little known outside a small circle of experts. It is correlated with an online archive of the entire corpus of nineteenth-century French drawings in the holdings of these Baltimore museums.

This volume has been published in conjunction with the exhibition The Essence of Line: French Drawings from Ingres to Degas, organized by The Baltimore Museum of Art and the Walter Art Museum, Baltimore, Maryland, and held at:

“Very full and solid, this work will be a valuable contribution to nineteenth-century studies and an essential reference for art libraries.”—Colta Ives, Curator, The Metropolitan Museum of Art

“With its beautiful illustrations, its handsome design and layout, and its scholarly approach, this catalog and the Web site that accompanies it exemplify the wonderful things museums can do when focusing on their own collections.”—Petra ten-Doesschate Chu, Nineteenth-Century Art Worldwide

Jay M. Fisher is Deputy Director of Curatorial Affairs at The Baltimore Museum of Art.

William R. Johnston is Associate Director and Curator of eighteenth- and nineteenth-century art at The Walters Art Museum.

Kimberly Schenck is Conservator at The Baltimore Museum of Art.

Cheryl K. Snay is Research Associate, Department of Prints, Drawings, and Photographs at The Baltimore Museum of Art.

The aspirations of nineteenth-century Baltimoreans for their growing city are reflected in the magnificent collections of French drawings at The Baltimore Museum of Art and the Walters Art Museum, brought together for this exhibition. These holdings, which primarily consist of the collections of several generous donors and remain remarkably intact, reflect the unique connection between American collectors and French artists during this period. In addition, they bear witness to the strong sense of civic duty that prevailed among the town’s wealthiest citizens. These individuals shared a generosity of spirit and an absolute commitment to the importance of public education; indeed, many of the works included here were acquired or donated to the museums with the specific goal of making them available to the public as a resource that would allow people at all levels of Baltimore society to experience and learn about the arts. The dedication of these benefactors to the larger community remains evident today not only by The Baltimore Museum of Art and The Walters Art Museum, but also by the existence of numerous other cultural and educational institutions that they helped to found, including The Johns Hopkins University, the Peabody Institute, and the Enoch Pratt Free Library.

The collections of the two museums, here augmented by works from the Peabody Institute Art Collection, now owned by the Maryland State Archives and on loan to The Baltimore Museum of Art, provide a comprehensive survey of nineteenth-century French art. We thank State Archivist Edward Papenfuse and Curator Elaine Rice Bachman for their generous cooperation.

Together, all these collections span the nineteenth and early twentieth century, offering the full spectrum of draftsmanship, from preliminary sketches to highly finished drawings and watercolors. Although it is not unusual to separate watercolors and pastels from ink and other “black and white” media, they are combined here, partly in deference to nineteenth-century collectors, who sometimes mounted them together in albums or hung them next to each other in their galleries, and partly to reflect the growing interpretation of watercolors and pastels in France in the second half of the century as “drawing in color.”

Included are artists who represented the mainstream in French art, as well as now less-familiar talents who were once much appreciated. The term French has been interpreted broadly in order to be as inclusive as possible. Certainly, artists who were born and worked in France make up the bulk of the content of the collections considered here. Also included are artists from other countries who were either naturalized citizens of France, as in the case of Karl Bodmer, or who were taught or worked extensively in that country, such as Mary Cassatt and Ary Scheffer. Similarly, French artists who immigrated to the United States and worked here—for example, Charles Balthazar Julien Fevret de Saint-Mémin and Jules-Emile Saintin—are included in our study. That the preponderance of works in this exhibition was acquired by some of the most perspicacious collectors of their era provides visitors a unique insight into the evolution of tastes in this country.

By presenting The Essence of Line: French Drawings from Ingres to Degas, The Baltimore Museum of Art and the Walters Art Museum are proud to continue the work of Baltimore’s early cultural community in making these objects available to a broad audience and share a commitment to collaboration, most recently exemplified by The Triumph of French Painting: Masterpieces from Ingres to Matisse, which traveled across the United States and to London in 2000–2002. The current exhibition, which will also be on view at the Birmingham Museum of Art, Alabama, and the Tacoma Art Museum, Washington, features more than one hundred important works. We are grateful to Gail Andrews Trechsel, Director of the Birmingham Museum of Art, and Rod Bigelow, Interim Director, and Patricia McDonald, Chief Curator, of the Tacoma Art Museum, who have worked with us in the public presentation of this exhibition.

In addition, thanks to innovations in technology, it is now possible to make the more than 700 drawings and watercolors in the Baltimore collections available to the public through the Internet, many for the first time. Because of their fragility and sensitivity to light, drawings are not exhibited as frequently as other works of art, and access to them is by necessity limited. Visitors to the Web site will be able virtually to “flip through” the pages of a sketchbook whose condition precludes its exhibition or through the leaves of an album long since dismantled for reasons of preservation. We hope this electronic catalogue with search capabilities will both satisfy the curiosity of the casual browser and inspire new research into these extensive collections.

Curators at The Baltimore Museum of Art and the Walters Art Museum have long seen the wisdom of exhibitions of French art that combine the strengths of our two collections, for as unique as each collection is separately, the parts become truly extraordinary when united as a whole. The Deputy Director for Curatorial Affairs and Senior Curator of Prints, Drawings, and Photographs at the Baltimore Museum of Art, Jay Fisher, conceived the idea for this project, which was quickly taken up by his colleague at the Walters Art Museum, William R. Johnston, Associate Director and Curator of Eighteenth- and Nineteenth-Century Art. Both curators, who, between them, have dedicated more than sixty-eight years of building, studying, and promoting their collections, recognize the importance of making these remarkable holdings and Baltimore’s status as a center for nineteenth-century French art better recognized. Johnston launched the project in 1998 by assigning Carol Bates Fellow Cheryl K. Snay to the task of cataloguing the Walters drawings, and she went on to work for both institutions, coordinating all aspects of this project. We are tremendously grateful to her for her excellent management of the project’s many details and for her impressive scholarship as a major contributor to the catalogue. A significant part of this cataloguing project was a conservation survey and technical study coordinated by Kimberly Schenck at The Baltimore Museum of Art, who also contributed an important essay on drawing materials available in France during the nineteenth century. Paper Conservator Elissa O’Loughlin at the Walters undertook a similarly thorough review of that collection.

In addition, this ambitious venture has called upon the efforts and skills of the entire staff of both institutions. We are fortunate to have dedicated educators, advocates for the needs and interests of our audience; we also benefit from the talents of our exhibition staff, whose imaginative minds always find a new and effective way to present each exhibition. Added to these very visible results in the galleries are the unseen efforts of literally dozens of BMA and Walters staffers—those who raise the funds that support museum programs, those who promote and market the exhibition, those who are involved in the production of the catalogue, those who pack, ship, and preserve the art, and of course those who protect the artworks every day.

Finally, the generosity of Baltimore’s collectors, past and present, is echoed by that of the Richard C. von Hess Foundation and the National Endowment for the Arts. Their enthusiasm for this project and their financial support have been invaluable, and without it this exhibition could not have been realized.