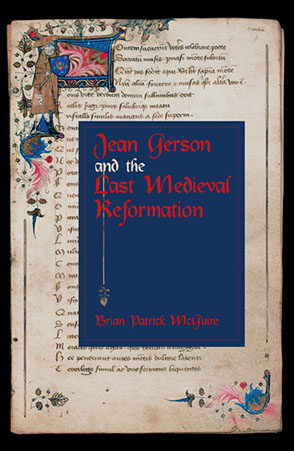 “There may never be a definitive study of Jean Gerson, but McGuire’s book is the most comprehensive, insightful, and judicious known to me. It is the benchmark for further work on the great Chancellor.”—Bernard McGinn, University of Chicago

In this biography of the noted French philosopher and theologian Jean Gerson, the first since 1929, Brian Patrick McGuire presents a compelling portrait of Gerson as a voice of reason and Christian humanism during a time of great intellectual and social tumult in the late Middle Ages.

Born to a peasant father and mother in the county of Champagne, Gerson (1363–1429) was the first of twelve children. He overcame his modest beginnings to become a scholastic and vernacular theologian, a university intellectual, and a church reformer.

McGuire shows us the turning points in Gerson’s life, including his crisis of faith after becoming chancellor of the University of Paris in 1395.

Through these key moments, we see the deeper undercurrents of his mystical writings. With their rich display of spiritual and emotional life, these writings were to earn Gerson the appellation “doctor christianissimus.” In turn, they would influence many later thinkers, including Nicholas of Cusa, Ignatius of Loyola, Francis de Sales, and even Martin Luther.

Gerson is a man perhaps easier to admire than to love: conscientious to a fault, at once a pragmatist and an idealist in church politics, a university intellectual who both fostered and distrusted the religious aspirations of the laity, a powerful prelate who moved among the great yet never forgot his peasant origins, a self-revealing yet intensely private man who yearned for intimacy almost as much as he feared it.

McGuire ably situates Gerson in the context of his age, an age replete with doctrinal controversies and the politics of papal schism on the eve of the Protestant Reformation. Gerson emerges as a proponent of dialogue and discussion, committed to reforming the church from within. His courageous effort to renew the unity of a unique civilization bears examination in our own time.

“There may never be a definitive study of Jean Gerson, but McGuire’s book is the most comprehensive, insightful, and judicious known to me. It is the benchmark for further work on the great Chancellor.”—Bernard McGinn, University of Chicago

“Jean Gerson was an idealist, Brian McGuire writes, ‘and idealists do not usually do well in the history books.’ But this book is an exception, for McGuire gives us a compelling portrait of this severe and lonely man who may, nonetheless, have been his era’s most effective champion of rational discourse, peaceful reform, and international cooperation. If Gerson’s diplomacy and conciliar policies had prevailed, much of Europe’s tragic history might have been averted. This awareness gives McGuire’s account of ‘the last medieval reformation’ a deep poignancy that complements his learned and lucid analysis of Gerson’s multifarious works.”—Barbara Newman, Northwestern University

“I hope that the quality and comprehensiveness of this biography will serve to make known to a broader audience this most fascinating personality, whose life serves as a microcosm of the ideas and movements that characterized the religious and intellectual world of northern Europe in the late Middle Ages.”—Louis B. Pascoe, S.J., American Historical Review

“Few scholars, if any, know Gerson’s works and their sources better than McGuire does. . . . He has assembled a vast amount of information into a coherent narrative. . . . This study is certain to become the starting point for much future research on Gerson.”—Daniel Hobbins, Journal of Ecclesiastical History

“The detailed chronology of Gerson’s life and publication history, together with the excellent bibliography, can be usefully consulted by students and scholars alike. This first-rate biography conveys a palpable sense of Gerson’s deep passions, keen intellect, and personal struggles that together mirror the many complexities of his own age.”—Michael Wolfe, Canadian Journal of History

“B. P. McGuire wrote an excellent biography of an important late medieval intellectual. He moreover presents an overview of Gerson’s writings. B. P. McGuire’s writing style is very pleasant. All of this make B. P. McGuire’s book a work worth reading and a study that anyone interested in Gerson will highly appreciate.”—Michiel Decaluwe, Revue D'Histoire Ecclesiastique

“McGuire is the first scholar in almost eighty years to have had the spirit to take on the formidable task of attempting a full-scale biography of Gerson. Going about that task with thoroughness, sensitivity, and good, calmly balanced judgment, he has indeed succeeded in establishing the ‘benchmark’ for future work on Gerson’s life. And that has to be recognized as no mean achievement.”—Francis Oakly, Catholic Historical Review

“McGuire’s biography is well researched and dispels some long-standing myths surrounding the theologian-philosopher. It contains concise summaries of all Gerson’s major and several of his minor works as well as numerous Gersonian passages translated into English by the author.”—Judy Kem, Sixteenth Century Journal

Brian Patrick McGuire is Professor of Medieval History at the Institute of History and Social Theory at Roskilde University in Denmark. His books include Friendship and Community: The Monastic Experience, 350–1250 (1988) and Brother and Lover: Aelred of Rievaulx (1994). Most recently, he edited and translated the volume Jean Gerson: Early Works (1998).

1. One Life in the Shadow of Death

3. Doing Theology for Everyone

11. The Legacy of Jean Gerson

CHRONOLOGY OF GERSON’S LIFE AND TIMES

BIBLIOGRAPHY OF PRIMARY AND SECONDARY SOURCES