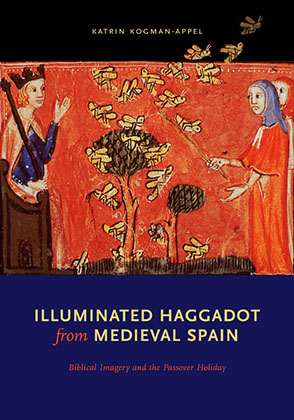 “Katrin Kogman-Appel of Ben-Gurion University, in her splendid new book examining the sources of five rare early 14th-century Haggadot from Aragon and Catalonia, revives the distinct possibility that the Jews were originally the pioneers of the images of the biblical narrative.”—Meir Ronnen, Jerusalem Post

Emerging in Spain after 1250, Jewish narrative figurative painting became a central feature in a group of illuminated Passover Haggadot in the early decades of the fourteenth century. Illuminated Haggadot from Medieval Spain describes how the Sephardic Haggadot reflect different visualizations of scripture under various conditions and aimed at a variety of audiences. Though the specifics of the creation of these works remain a mystery, this book delves into the cultural struggles that existed during this period in history and shows how those conflicts influenced the work.

The culture surrounding the creators of the Sephardic Haggadot was saturated in conflict revolving around acculturation, polemics with Christianity, and struggles within Sephardic Jewry itself. Kogman-Appel presents the Sephardic Haggadot as visual manifestations of a minority struggling for cultural identity both in relation to the dominant culture and within its own realm.

“Katrin Kogman-Appel of Ben-Gurion University, in her splendid new book examining the sources of five rare early 14th-century Haggadot from Aragon and Catalonia, revives the distinct possibility that the Jews were originally the pioneers of the images of the biblical narrative.”—Meir Ronnen, Jerusalem Post

“All in all, Kogman-Appel is to be commended for offering such a comprehensive and meticulously researched view of the sophisticated images in the Sephardic Haggadot, and for illuminating the complex Jewish-Christian relationships in medieval Spain from a little known point of view.”—Shalom Sabar, Shofar

“The book breaks new ground in its close examination of the seven earliest and most significant illuminated Sephardic haggadot as representatives of a new phenomenon—the embellishment of haggadot with extensive cycles of Biblical imagery. Recognizing the diversity of relationships among these works, it grounds the emergence and content of their imagery within the unique cultural-intellectual context of late medieval Iberian Jewry.”—Pamela A. Patton, Southern Methodist University

“The scholarship is impeccable throughout, and the close analysis of the manuscripts’ imagery and sources is deeply impressive. The discussion of visual motifs in the illustrations; the articulation of the concept of visual congruence; the conclusions about the interrelationship of the manuscripts; and the identification of the Midrashic works reflected in the images, are all learned, thorough, and convincing. Together they constitute a major contribution to the field of medieval Jewish manuscript illumination.”—Sara Lipton, SUNY, Stoney Brook

“Scholars of medieval culture, and art historians in particular, owe a debt of gratitude to Katrin Kogman-Appel for her fundamental study of this material, which surely sets the benchmark for future explorations of the intersection of Jews, Christians, and art in the Middle Ages.”—Adam Cohen, The Medieval Review (TMR)

“Taken as a whole, this well-written, scholarly and highly thought-provoking book constitutes a distinguished contribution to our understanding of late medieval Jewish culture and society. The work is lavishly illustrated with 16 full colour plates and a further 174 black-and-white plates.”—Simon Barton, History

“Clearly written and densely annotated, this volume is beautifully produced, with many of the illustrations occupying a full page. Excellent color plates of 16 illustrations make one wish that a few more of the additional 174 halftones were also in color. This volume is a must for all collections that feature arts of the Abrahamic traditions.”—John Renard, Religion and the Arts

“This is the only book to examine intensively the biblical cycles of Iberian Haggadot, which are the earliest Jewish narrative imagery to appear since Late Antiquity and the first to render biblical narrative in chronological order. . . . From the beginning of her study, Kogman-Appel displays a sharp awareness of the historiography of Hebrew illuminated manuscripts and does a good job of making readers aware of the burden such notions as recension theory, particularly that which is focused on lost Jewish exemplars, have placed on scholars of Jewish art. . . . Illuminated Haggadot from Medieval Spain: Biblical Imagery and the Passover Holiday, with its rich observations, plentiful illustrations, and thorough bibliography, is certain to be a valued resource for those working in the field of Hebrew manuscript illumination.”—Julie Harris, CAA Reviews

Katrin Kogman-Appel is Lecturer in the Department of Arts at Ben-Gurion University of the Negev, Beer-Sheva. Kogman-Appel's credentials include publishing Jewish Art Between Islam and Christianity: The Decoration of Hebrew Bibles in Spain (2001) as well as contributing to Imaging the Early Medieval Bible, edited by John Williams and published by Penn State Press in 1999.

Part I: Acculturation and Borrowings from Christian Art

2. Motif Books and Images from Memory: Image Making in the Golden Haggadah and British Library, Or. 2884

4. The Sarajevo Haggadah and the Bologna-Modena Mahzor

5. Other Methods of Image Making

Conclusions to Part One

6. Jewish Biblical Exegesis Employed in the Strategy of Image Making

7. Designing the Messages of the Sephardic Picture Cycles: The Cultural Profile of the People Involved

Jews and Authority in the Crown of Aragon