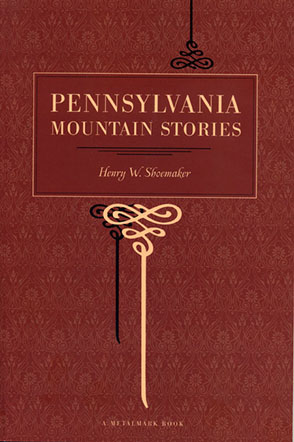 The idea for this book came to Shoemaker during his college years, when he spent his vacations traveling through the mountains of Pennsylvania—on foot, on horseback, or by buggy. He claimed that he heard the stories, “mostly after supper,” from people he met at lumber camps, farmhouses, and backwoods taverns. “As so many of the tales are devoted to subjects of a more or less supernatural order they cannot very well be true,” he writes, but then hastens to add, “neither are they of the author’s invention.”

In this ethereal space between fact and fiction, Pennsylvania Mountain Stories reveals the values, the passions, the obsessions of the people who told them. This volume, published under the Metalmark Books imprint, contains a facsimile reproduction of the 1911 edition, originally published by the Reading Times Publishing Company.

Henry W. Shoemaker (1880–1958) was the author of more than twenty volumes of popular Pennsylvania literary folklore and numerous narratives about Pennsylvania’s disappearing wildlife during the first half of the twentieth century. He also served as Pennsylvania’s first state folklorist from 1948 to 1956.

Folk Lore and Legends Collected in Northern and Western Pennsylvania

Legends and Traditions, Old and New, Gathered Among the Pennsylvania Mountains