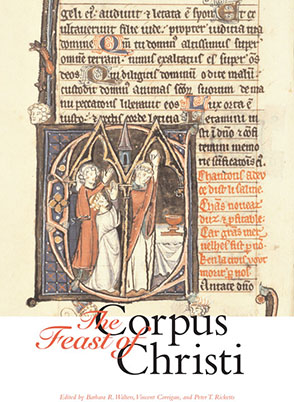 “In this welcome, scholarly book, three American academics working in the field of medieval studies assemble a remarkable collection of material that brings fresh light to bear on the origins and early development of the festival of Corpus Christi.”—Kenneth Stevenson, Journal of Theological Studies

The feast of Corpus Christi, one of the most solemn feasts of the Latin Church, can be traced to the Fourth Lateran Council in 1215 and its resolution of disputes over the nature of the Eucharist. The feast was first celebrated in Liège in 1246, thanks largely to the efforts of a religious woman, Juliana of Mont Cornillon, who not only popularized the feast, but also wrote key elements of an original office.

This volume presents for the first time a complete set of source materials germane to the study of the feast of Corpus Christi. In addition to the multiple versions of the original Latin liturgy, a set of poems in Old French, and their English translations, the book includes complete transcriptions of the music associated with the feast. An introductory essay lays out the historical context for understanding the initiation and reception of the feast.

“In this welcome, scholarly book, three American academics working in the field of medieval studies assemble a remarkable collection of material that brings fresh light to bear on the origins and early development of the festival of Corpus Christi.”—Kenneth Stevenson, Journal of Theological Studies

“The inclusion of Corpus Christi material in such vernacular poems attests to the growing popularity of the feast and the desire of the Church that this feast be received and disseminated at a popular level. Beyond the content of this book that is stellar, this volume distinguishes itself as a monument to collaborative research and a must-have for any serious scholar of the liturgy.”—Michael S. Driscoll, Catholic Historical Review

“The Feast of Corpus Christi is in many ways an invaluable resource. It makes available for the first time a centrally important group of texts and chants, presented in such a way that specialists and nonspecialists alike can easily make use of them for research and teaching. Although not everyone will agree with Walters’s contentions, the book greatly enriches our understanding of the feast by placing an abundant offering of primary source material in its historical context.”—Susan Boynton, Speculum: A Journal of Medieval Studies

Vincent Corrigan is Professor of Musicology at Bowling Green State University in Ohio.

Peter T. Ricketts is Honorary Professor of French Studies at the University of Birmingham.

1. THE FEAST AND ITS FOUNDER by Barbara R. Walters

The Vita of Juliana of Mont Cornillon

Juliana of Mont Cornillon as Prophetess

Diffusion of the Feast through Social Networks

The Community of Women

PART II: MATERIALS FOR THE STUDY OF CORPUS CHRISTI: SOURCES

2. INTRODUCTION TO THE LITURGICAL MANUSCRIPTS by Barbara R. Walters

Chronological Ordering of the Three Offices and the Papal Bull Transiturus

3. CRITICAL EDITIONS OF THE LITURGICAL MANUSCRIPTS by Vincent Corrigan

The Hague, National Library of the Netherlands, MS 70.E.4

4. INTRODUCTION TO THE MOSAN PSALTERS by Barbara R. Walters

CRITICAL EDITION OF THE POEMS OF THE MOSAN PSALTERS